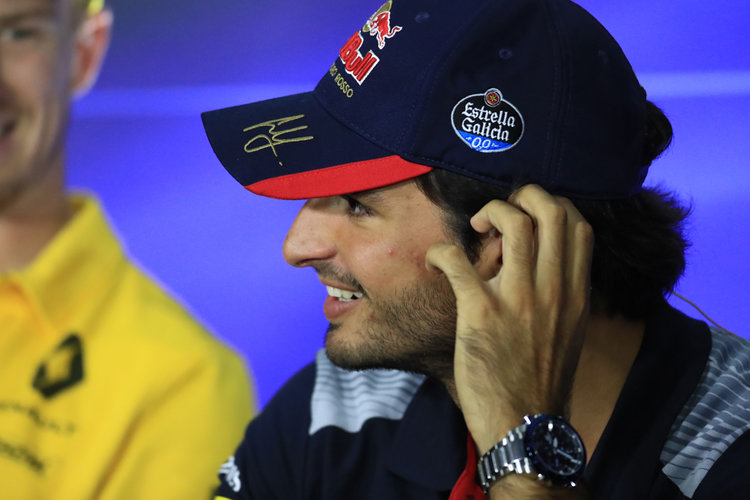 The much-anticipated move of Carlos Sainz Jr. from current squad Scuderia Toro Rosso to the Renault Sport Formula 1 Team next year has now been confirmed.

The Spaniard will join up with the French team in 2018, on a loan basis, in what is believed to have been a ‘sweetener’ to coax Renault into concluding their partnership with Toro Rosso as engine supplier in 2018, enabling the Faenza based squad to switch to Honda engines.

Hence, despite Red Bull Racing Team Principal Christian Horner stating categorically “Sainz is going nowhere” earlier this year, the Spaniard has now been given the green light to move on, and prove his talent at another squad, with much more potential.

The Spaniard, who has sometimes felt hard done by, by Red Bull Racing management, who have often favoured their other junior drivers over the Spaniard when it comes to inter team promotions, was thrilled to be finally given the opportunity to potentially advance his Formula 1 career, and join a manufacturer team.

“I’m very happy to be joining Renault Sport Formula One Team. To be a Formula 1 driver for a manufacturer team is an honour and I hope to reward Renault’s faith in me with my very best performances on track.

“The trajectory of Renault Sport Formula One Team is exciting and I’m proud to join at such an important time in their history. I am looking forward to working with everyone at Enstone and Viry, and driving alongside Nico Hülkenberg.

“I have worked closely with Renault in Formula 1 and previously in motorsport, so I know their motivation and capabilities. This is the start of a very exciting new chapter in my career.

“I would like to say thank you to Red Bull for all their confidence and support and for allowing me to take this opportunity. Last but not least, I specially want to thank all the people who work in Toro Rosso. They are a fantastic team of professionals and I wish them the best for the future.”

Red Bull Motorsport Consultant Helmut Marko was pleased to have completed a deal that will see Sainz Jr. remain under the Red Bull umbrella, whilst allowing him to spread his wings and gain experience, and believes it is a strong arrangement for everyone involved.

“We are happy to have reached an agreement for Carlos to drive for Renault Sport Formula One Team in 2018. He is a tremendous talent and he will benefit from working with a manufacturer team alongside a highly experienced driver.

“This will give Carlos a different challenge and we will be keenly watching his progress there as he remains part of the Red Bull family.

“This is very good development for both Carlos and Renault Sport Formula One Team and will also allow us to bring a new talent into Formula One.”

“Carlos Sainz is a very promising driver who has been on our radar for some time, especially after his successes in Renault junior formulae. It is positive news for us to be able to confirm Carlos for 2018.

“This choice is well aligned with our mid-term strategic plans. We feel that Nico and Carlos will complement each other on and off track and the combination should help us push forwards on the grid.

“I would like to thank Helmut Marko for loaning Carlos to us for this period.

“We must thank Jolyon for his ongoing hard work with the team and his efforts over the past two seasons. He is a dedicated driver and we wish him the best in the next steps of his career.”