Daniel Ricciardo: “I really thought I could get on pole position” 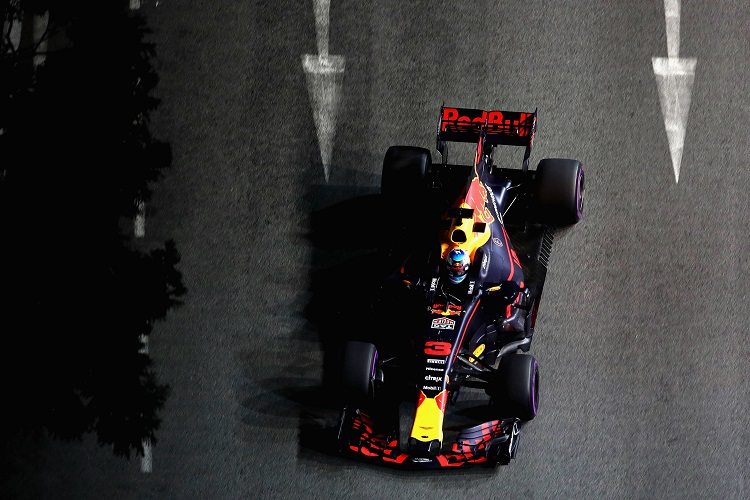 Daniel Ricciardo was disappointed to qualify third on the grid in Singapore - Credit: Clive Mason/Getty Images

Red Bull Racing‘s Daniel Ricciardo will start third for the Singapore Grand Prix on Sunday after qualifying behind both his team-mate Max Verstappen and Scuderia Ferrari‘s Sebastian Vettel.

Ricciardo, who dominated Friday’s two practice sessions, was just 0.026 seconds shy of his team-mate’s lap time in a tense and open third qualifying session and admits he his disappointed with the result.

“I really thought I could get on pole position today so I’m a bit disappointed to be honest,” said Ricciardo.” Seb’s last lap was strong and we couldn’t run with that. That pace was good for us in Q3 and it seems like he did most of his time in the first sector. I didn’t really know what else we could do.

Ricciardo stated his intentions before the Singapore Grand Prix weekend, believing this was his best chance of a race victory since his fortunate win at the Azerbaijan Grand Prix in June. Despite starting on the second row of the grid, Ricciardo still believes he can win Sunday’s race.

“If we get the start right tomorrow then we can put some pressure on him [Vettel] through our strategy. I still believe we have a good chance to win this race.”

Singapore is known as the toughest race on the calendar but Ricciardo relishes the challenge and is desperate to claim his second victory of the year there.

“I do enjoy a street circuit and the challenges that come with it, brushing up against the walls and all that. I feel I can do this lap after lap for two hours tomorrow and still hold my concentration. I really want this one so hopefully that hunger prevails tomorrow.”

By Paolo Iantosca
3 Mins read
The Checkered Flag looks back at the 2020 Formula 1 season of the McLaren F1 Team.