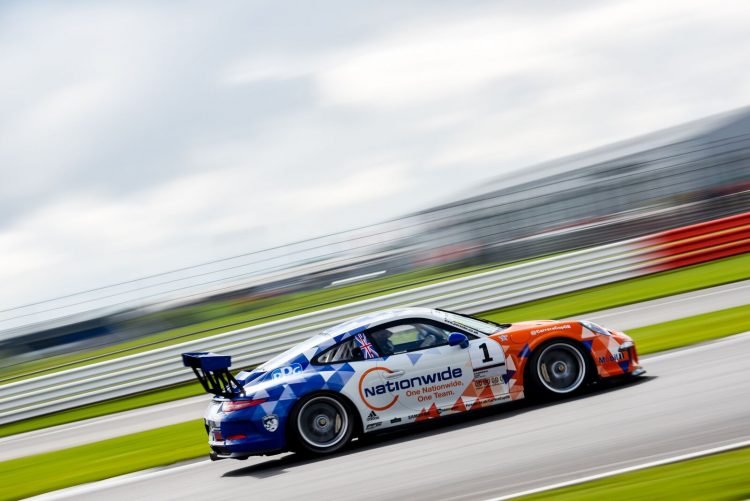 Dan Cammish (Redline Racing) will lead the twenty two car Porsche Carrera Cup GB field away from both morning rolling and afternoon standing starts ahead of the twelfth and thirteenth rounds of the 2017 season at Silverstone. However, Cammish who currently sits third in the points standings, was amongst the almost unprecedented twenty one of the twenty two competitors who lost a time during the session due to exceeding track limits.

The only driver not to lose a time was the current championship leader and 2016/2017 Porsche Scholar Charlie Eastwood (Redline), who joins Cammish on the front row of the grid for race two on Sunday afternoon. Eastwood had his restrictions in the form of a ten place penalty for contact with Cammish at Knockhill, which limit him to thirteenth on the first race grid.

Dino Zamparelli (JTR) set times quick enough for second and fourth respectively and his approach to the opening race could hold the key for the rest of the season. Within ten points of Eastwood’s championship lead, round twelve represents Zamparelli’s best chance yet to steal the points initiative. How far he is prepared to push Cammish at the start, or whether he will be content to maintain second and gain solid points, could ultimately decide whether he is able to leapfrog Irishman Eastwood in the championship run in. Eastwood’s own approach will also be under scrutiny. He fought through the top ten in 2016 to make progress after difficult qualifying at Silverstone, but a considerably larger Pro contingent will make that task all the harder this time around.

Zamparelli’s JTR stablemate Tio Ellinas enjoyed his strongest performance to date in Carrera Cup GB and will line up third for both races tomorrow. Dan McKay (Redline) and Euan McKay (Redline) split sibling honours even, with Dan sixth for round twelve and fifth for round thirteen and Euan’s weekend best fourth for the morning race. He starts seventh for the afternoon’s event. Another Redline Racing contender who enjoyed one distinctly quicker lap time and one marginally less rapid effort was Tom Oliphant, with fifth and eighth his results card from qualifying. JTR’s trio is rounded off by Lewis Plato who will start race one from seventh and race two from sixth on the grid.

IN2Racing and Slidesports comprise the final three Pro entries for this weekend. Tom Wrigley again had the advantage over his recently recruited team-mate Jamie Orton, the former achieving eighth and ninth with the latter tenth and eleventh for tomorrow’s two races. Ross Wylie rounds out the Pro contingent, eleventh and twelfth.

Pro-Am1 is headed by a familiar face who has been much missed thus far in 2017. Karl Leonard returns to Carrera Cup GB with Team Parker Racing and promptly stormed to two class pole positions. His new team-mates Alex Martin and Justin Sherwood, dicing for the class crown and split by only three points with Sherwood holding the advantage, share second and third for both races. Graeme Mundy (Team Parker) and John McCullagh (Redline) complete the class grid sheets.

Two races that will ultimately prove pivotal, as the Type 991 Gen 1 era begins to draw to a close at Silverstone. Eastwood, Zamparelli or Cammish are the men who realistically still can walk away with the 2017 crown and each will have the chance to stake a distinct claim to that glory tomorrow. Whilst Cammish’s hopes realistically rest on the performance of his rivals, both Eastwood and Zamparelli are similarly reliant on their competitors to continue to give them the space and respect they have all season long. The imponderables, the what ifs will soon prove irrelevant though. After race one at 09:40am and race two at 03:15pm, it is the physical results that will be recorded in the history books and define the narrative that is taken to Brands Hatch GP on finals day in two weeks time.

Full results from all of the TOCA action this weekend at Silverstone can be found here: http://www.tsl-timing.com/event/173703