Hamilton Triumphs in Singapore but Nightmare for Ferrari 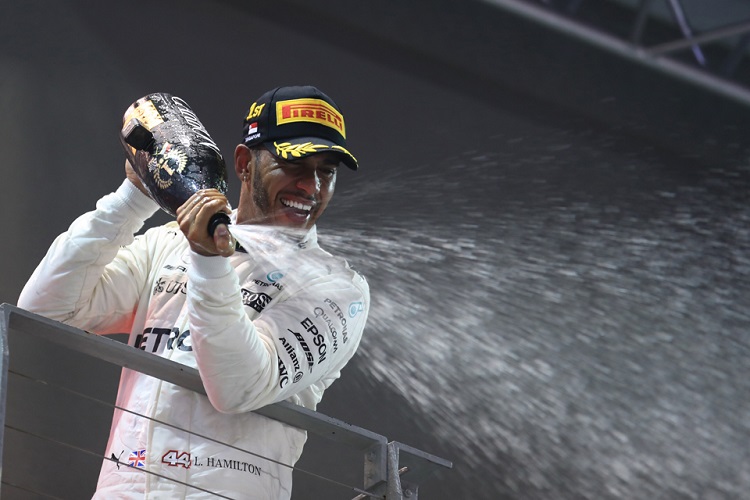 In the first ever Singapore Grand Prix to be held in wet conditions, the start was always going to be tricky, and it saw a mixture of tyre strategies, with drivers up and down the grid in two minds whether to choose intermediate or full wets for the start.

Starting from fifth on the grid, Hamilton went into the race feeling that his Mercedes AMG Petronas Formula One Team was the third best team this weekend, but found himself in the lead by the fifth corner after taking advantage of a chaotic first corner that eliminated both Scuderia Ferrari drivers and Red Bull Racing’s Max Verstappen, while it also heavily affected Fernando Alonso’s day.

Pole sitter Vettel made a robust move across the track on Verstappen as he attempted to defend his position heading into turn one, only for the Dutchman to have a fast-starting Kimi Raikkonen alongside him.

Verstappen jinked left briefly to prevent a clash with Vettel, only for the gap between the three cars to continue to close, to the point where Raikkonen hit Verstappen and was then pushed into the side of team-mate Vettel’s car.

Alonso had made a stunning start from eighth on the grid and was likely being a net third or fourth heading into turn one, only for the Spaniard to be caught up in the crash after an out-of-control Raikkonen careered into the turn and collected both the McLaren Honda Formula 1 Team racer and Verstappen.

Vettel appeared to get away with the move and retained the lead through the opening three corners, only to lose control of his Ferrari on the run down to turn five, spinning and hitting the wall, causing more damage that ultimately saw his race come to an end when his engineers requested him to stop.

This left Hamilton in the lead from Red Bull’s Daniel Ricciardo, with both drivers on the Intermediate tyre, while Nico Hülkenberg, on the full wet tyres, had jumped up to third for the Renault Sport Formula 1 Team ahead of Sergio Perez, who had started twelfth on the grid for the Sahara Force India F1 Team!

The safety car was deployed to enable the stranded cars of Raikkonen and Verstappen to be removed from the run-off zone of turn one, and the debris from the track, and on the restart, Jolyon Palmer made a great move on Valtteri Bottas to make it two Renault’s inside the top five, but before long it became apparent that the track was coming to the Intermediate-shod runners, with Hamilton and Ricciardo pulling away from Hülkenberg, Perez and Palmer.

Alonso, who after being the victim of the first corner crash, had attempted to continue despite an obviously damaged McLaren, but found himself falling further and further back, and ultimately was forced to concede that his day was run, particularly after finding himself behind the two Sauber F1 Team drivers.

Daniil Kvyat’s day was soon over in the turn seven barriers, seconds after making a great pass on Kevin Magnussen for what was at that point tenth position. The Scuderia Toro Rosso driver went into the turn with locked up brakes, and went straight into the barriers, bringing out the safety car for the second time.

Hülkenberg dropped down the order to fifth after Renault delayed pitting him for fresh intermediates, promoting Bottas into the final podium position and Carlos Sainz Jr. into fourth, while Hamilton questioned the decision not to switch to a fresh set of Intermediates that Ricciardo did from second, with only the Briton and team-mate Bottas not making their first pit stop at this phase.

Hamilton again controlled the race after the restart, while there was a lot of action behind, with Felipe Massa, the only driver aside from Pascal Wehrlein still on the Full Wet tyre causing a small traffic jam behind him. The Williams Martini Racing driver first saw Romain Grosjean get ahead, before Magnussen and Esteban Ocon also worked their way ahead, although for the Dane it was a close thing as he brushed wheels with Massa at the high-speed kink down Raffles Boulevard.

Magnussen was the first driver to make the switch to dry tyres, switching to the Ultrasofts, and it was not long before every driver had made the decision to pit, although some drivers decided to use either the Supersoft or even the Soft compound.

The safety car was required once more however, with Marcus Ericsson crashing his Sauber on the Anderson Bridge, with the Swede ending up facing the wrong way down the track. Hamilton again was critical of the decision to deploy the safety car, with the Briton feeling a Virtual Safety Car would have been enough, but with a tractor required to remove the stricken C36 from the track, the full safety car was indeed the right call.

Despite this, Hamilton again retained the lead with ease from Ricciardo and Bottas, while Sainz again run fourth thanks to a hydraulic issue for Hülkenberg, who had climbed back up to that position thanks to some stunning early laps on dry tyres. Unfortunately for Hülkenberg, he would not see the end of the race thanks to the issue, and his extended run without a Formula 1 podium goes on.

The order would remain pretty static until the chequered flag, with Hamilton even having the time to set a new race lap record, with the Briton extending his championship advantage over Vettel to twenty-eight points thanks to the German’s retirement, while Ricciardo claimed his fourth consecutive podium in Singapore and his seventh of the season.

Despite having a less than impressive Friday or Saturday in Singapore, Bottas claimed the final spot on the podium, while Sainz claimed a career best finish in fourth ahead of Perez, who remained inside the top six all afternoon long to retain his record of finishing inside the points in each of the seven races in Singapore he has competed in.

Palmer, who found out earlier this weekend that he would not be a Renault driver in 2018, had a result that will do his future options and confidence the world of good, with the Briton claiming only his second points finish of his career in sixth.

Stoffel Vandoorne was the third driver to secure his career best finish in seventh for McLaren ahead of Williams’ Lance Stroll, while Romain Grosjean brought the Haas F1 Team two points for ninth, ahead of the second Force India of Ocon, while Massa and Wehrlein were the only other finishers, thanks to the late retirement of Magnussen with an engine-related issue.

But no one had an answer for Hamilton, who secured his third consecutive victory after wins in Belgium and Italy, while Bottas’ podium moves him to within twenty-three points of Vettel, who now needs to start his fight back in two weeks time in the Malaysian Grand Prix if he wants to fulfil his aim of becoming Ferrari’s first World Champion since Raikkonen back in 2007.