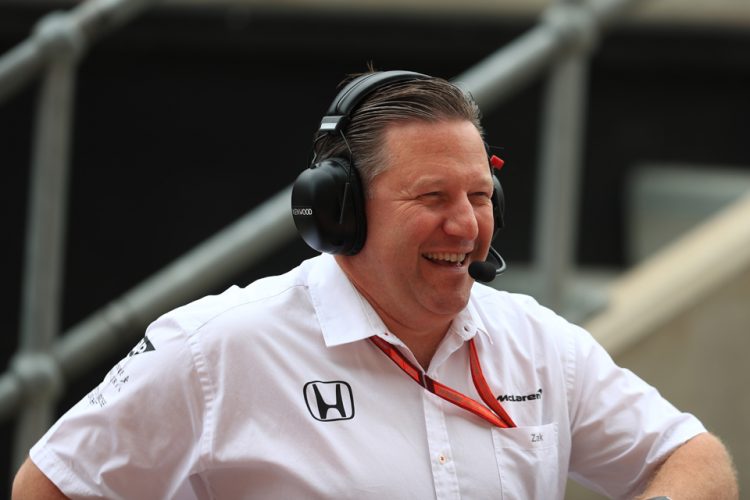 Zak Brown may be smiling but he has tough decisions to make in order to return McLaren to the head of the field. Credit: Octane Photographic Ltd.

McLaren-Honda Formula One Team‘s executive director, Zak Brown says that McLaren haven’t yet finalised a decision about their engine supplier for 2018, despite intensive talks with Renault during the Italian Grand Prix weekend.

A meeting between Brown, Renault’s Jerome Stoll, Cyril Abiteboul and Alain Prost, as well as Formula One’s sporting director Ross Brawn, took place in McLaren’s motorhome after Friday’s practice session. However, no decision was made by either parties.

“It is very complicated,” Brown said. “There are a variety of pieces to the puzzle, some in our control, some not.

“It can still go either way. It’s probably one of the biggest decisions McLaren have ever had to make.

“Negotiations are ongoing and they are going very well,” he added. “But you have to have a Plan B and a Plan C in the event you don’t reach an agreement. And we have those plans.”

A deadline of mid-September has been mentioned in order to allow enough time for McLaren to finalise their chassis design to accommodate either a Renault power-unit or that of Honda.

As well as car design headaches there is also financial implications for McLaren and Zak Brown to consider; cancelling the current contract with Honda could cost McLaren in excess of £50 million in funding. Brown however, believes the money is pointless if McLaren remains uncompetitive.

“We can’t afford not to be on the podium,” he said. “We are here to win so we are going to make a sporting decision.

“The best thing for McLaren is to make the best sporting decision possible,” he continued. “Fortunately we have extremely committed shareholders which means we can make a sporting decision and deal with the economics.”

Of course, the question on everybody’s lips and yet another consideration of Brown’s is whether Fernando Alonso will stay with McLaren for 2018, the Spaniard having previously stated that he’ll only stay if the team can provide him with a race-winning car.

“Fernando has not given us any ultimatum, that it’s ‘them or us’, at all,” Brown told Sky Sports. “His decision will be based on whether he thinks we will be competitive or not. He’s not been engine-specific in his desires.”