Sergio Perez: “Small margins were enough to miss out on the top ten” 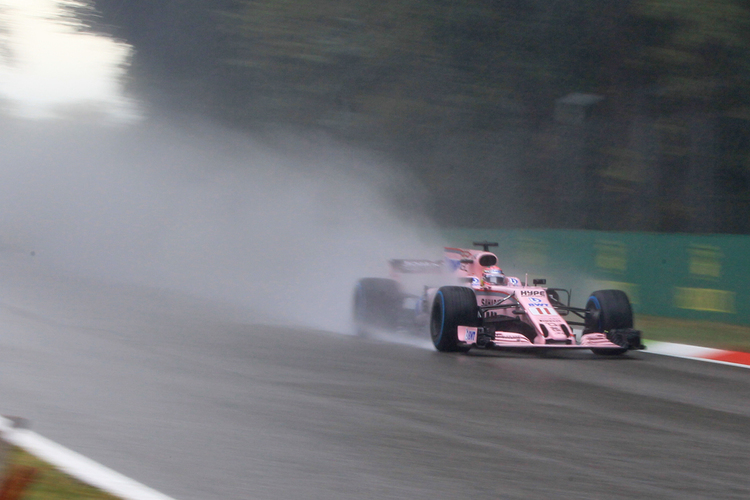 Sahara Force India F1 Team‘s Sergio Perez just missed out on making it into Qualifying 3 at the Italian Grand Prix, meaning that he was comprehensively beaten by his team-mate, Esteban Ocon.

Perez qualified eleventh fastest on the wet track, but thanks to both Red Bull Racing drivers having grid penalties, he will start the race in ninth place, just behind Stoffel Vandoorne of the McLaren Honda Formula 1 Team.

Ocon, on the other hand, produced the best qualifying performance of his career, setting the fifth fastest time but lining up on the second row of the grid, in third.

“It’s been a very long afternoon and I am happy the fans got a good show in the end after waiting in the rain for so long,” commented Perez, as Q1 had been postponed for two and a half hours due to the torrential rain.

“The conditions on track were difficult; there was a lot of standing water and the cars were aquaplaning a lot, so I think Charlie [Whiting] did the right thing by postponing the session.

In Q2, we took the decision to change from wets to inters and I only had two laps to try and make it happen. In the end, I missed out by two-thousandths: it’s not ideal, but it was the best we could do today.”

The Mexican knows that he was partly to blame for missing out on Q3, but is confident that he can make up places throughout the race on Sunday.

“It was not a perfect lap – I went a bit too wide at Ascari and I got very close to Ricciardo ahead of me, and that compromised me a little. These small margins were enough to miss out on the top ten. We’ll be moving up on the grid with a few penalties and I hope to make up some more positions tomorrow.”