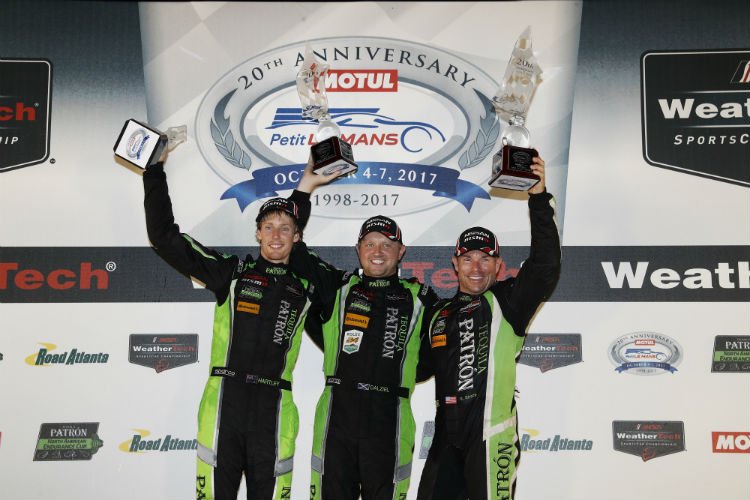 The #2 ESM Nissan DPi of Brendon Hartley, Ryan Dalziel and Scott Sharp took victory in the 20th running of Motul Petit Le Mans capitalizing after their two main rivals were hit with penalties in a dramatic final hour.

Both ESM Nissans and the #5 Mustang Sampling Cadillac were the main challengers for victory in the final hour of the 10 hour race.

But the leading #22 Nissan of Pipo Derani was penalised after forcing the #67 Ford GT of Ryan Briscoe off track and was handed a drive-thru penalty.

On the final restart, Filipe Albuquerque in the #5 forced his Action Express Racing team-mate, the #31 Whelen Engineering Cadillac of Dane Cameron off the track and was subsequently handed a stop-and-hold penalty.

To compound the #5’s misery even further, they were handed an additional drive-thru for not responding to the initial penalty soon enough, resulting in a disappointing fifth place finish, just behind a similarly disappointed Derani.

All this served to promote Hartley from third to the winners circles, taking victory from Cameron by 7.6 seconds.

Pipo Derani came away disappointed as he lost the lead in the final hour after receiving a drive-thru penalty for forcing another car off track. Credit: Richard Dole/LAT Images

ESM Dominant From The Start

With the Prototype and GTLM champions decided at the green flag there was no down to the wire championship battles to play out through the race, but it did not mean the drama and tension were lacking from the event.

The race started on a damp Road Atlanta and straight from the green flag, the #22 ESM of Derani was looking at every opportunity to try and find a way past fellow Brazilian, the polesitting #6 Team Penske ORECA of Helio Castroneves.

While he managed to get by half-way through the first lap, Derani wasn’t able to pull away, until Castroneves was involved in a collision with the championship leading GTD team.

Matteo Cressoni in the championship leading #63 Scuderia Corsa Ferrari, dropped a rear wheel on the grass while Castroneves was lapping him causing him to spin into the Prototype runner sending both cars into the gravel, bringing out the race’s first caution.

While both cars only lost a lap, it would be the first drama to effect the #63 Ferrari which was hit with both a 10 second stop and go penalty, for entering a closed pit and a drive-thru for the initial incident.

Team Penske carried on, learning all the time about the championship and ensuring the team worked together, finally regaining the lead lap on the five hour mark.

Upon the restart the ESM Nissans asserted their dominance of the event with both the #22 and then the #2 car taking turns in the lead, despite the #2 being punted into a spin by the #85 JDC Miller Motorsports ORECA of Chris Miller at the sixth hour mark. ,

As the race went on and the cautions brought the field together, the Cadillacs started to get on the pace, after being outpaced by the P2 inspired cars throughout the weekend.

Sadly, any chance out rounding out their stellar year with victory at Petit Le Mans ended when the car retired with a rare engine failure after two and a half hours.

As a result it fell to the #31 Whelen Engineering and #5 Mustang Sampling Cadillacs to challenge for victory and the #31 took the lead at several points during the race.

But still the Cadillacs, dominant nearly all season, weren’t quite on the pace at Road Atlanta.

The #13 Rebellion Racing ORECA had been running amongst the leaders all race long, but its challenge ended with a collision with the PC leading #38 Performance Tech Motorsports of Kyle Masson entry, as it emerged from the pits.

The collision ended the chance for the #38 to complete its 100% winning record for the season in the final PC round before its abolition.

The collision allowed the two BAR1 Motorsport cars to finally claim honours for the final PC race, with the #26 of Garett Grist, John Falb and Tomy Drissi leading home the #20.

With the #3 Corvette of Garcia and Jan Magnussen taking the title at the green flag, the pressure was off for the new champions and they dominated the first half of the race.

But the final half saw drivers from Ford, BMW and the Risi Competizione Ferrari swapping the lead, with the #24 BMW, shared by Kumo Witler and Bill Auberlen, celebrating his 400th race this weekend, hitting the front when it mattered.

In GTD the #93 Acura proved to be dominant in the category, until Mark Wilkins had a massive accident after making contact with the #54 CORE Autosport Porsche and made heavy contact with the tyre wall.

Yet the GTD championship leaders faced a very hectic quest to secure the title.

All that Christina Nielsen and Alessandro Balzan needed to do in order to secure the championship for the second year running was to achieve the minimum amount of drive-time required to score points and despite Cressoni’s adventures, they were well on the way to retaining their championship.

Yet with five hours to go, the Ferrari ground to a halt with a broken axle while Nielsen was at the wheel, just short of the limit.

The championship quest looked over, yet the car was able to be retrieved and fixed which enabled Balzan to re-enter the race and, along with Nielsen, racked up the necessary drive time to score points and clinch the title.

By Griffin Schmoyer
4 Mins read
Over ten IndyCar drivers past and present put on strong performances at the Rolex 24 at Daytona, winning overall and in class.
IMSANASCAR

By Justin Nguyen
7 Mins read
The 2021 Rolex 24 grid features drivers who also have backgrounds in NASCAR. While Jimmie Johnson and Chase Elliott boast championship résumés, others like Earl Bamber and Jack Hawksworth have raced as road course ringers.