Felipe Massa: “I’m not happy with the pace today“ 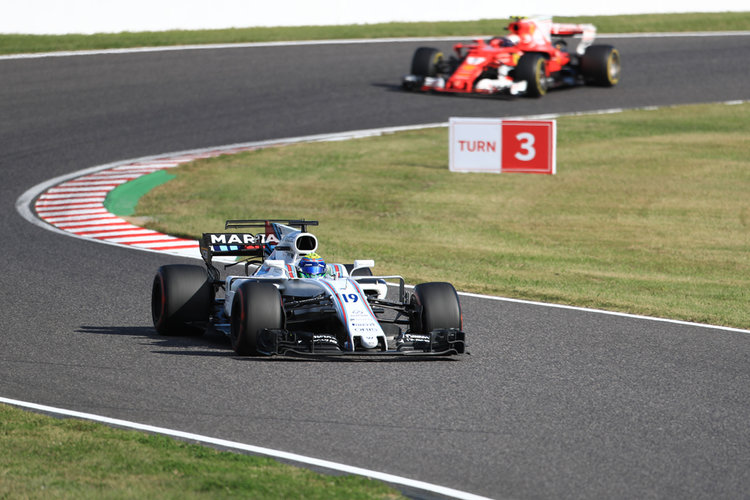 Williams Martini Racing driver Felipe Massa was unhappy with the performance of the FW40 at the Japanese Grand Prix, which he felt was down on pace compared to the other cars around him.

The Brazilian said that tyre wear was a big problem for them on Sunday, and that was causing them to be down on speed compared to their rivals, making it a difficult race all round for Massa.

“It was a very difficult race for us today. I was struggling with the degradation of the tyres with both sets. The other cars had better pace than us today and it’s difficult to understand why.”

The Williams driver finished the race in tenth place, to take the final point, but had been as high as eighth, before he was overtaken by the two Haas F1 Team driver’s in one foul swoop on lap 42.

It was a move that Massa felt was tricky but inevitable, because he just did not have the performance to keep Kevin Magnussen and Romain Grosjean behind him.

In the end, the Brazilian did manage to hold onto tenth place, despite a strong challenge from McLaren Honda Formula 1 Team driver Fernando Alonso in the latter stages of the race, and to do that considering the problems he was having to deal with, is a positive for Massa.

“At the end, I lost positions to both Haas in a move that was a little bit tricky, but they were much quicker than me anyway. If they didn’t pass me there, I think they could have passed me afterwards with the pace difference.

“I’m not happy with the pace today, but looking at the problems we had, we still finished in front of Renault and Toro Rosso, and one point is better than nothing.”