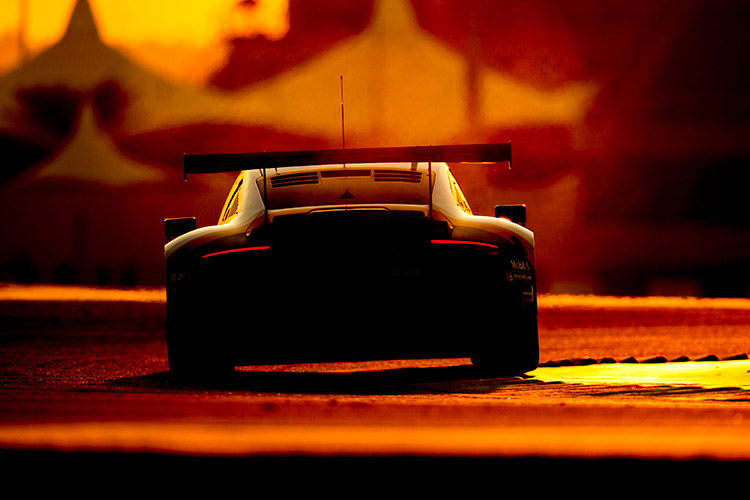 Michael Christensen and Kévin Estre were left wondering what could have been in Bahrain after being taken out of the 2017 6 Hours of Bahrain race after a collision with a LMP1 Toyota as they chased down the leaders.

Following a slow start to the race, the #92 Porsche 911 RSR of Christensen and Estre started to make progress through the field with a change of strategy after their first pit stop. A spirited drive from Estre saw him pass two Ferrari’s in an impressive overtaking move, before continuing his way through the field and taking the lead just after the two hour mark.

Christensen rejoined in third place after the driver change and work his way in to second place before setting his sights on the class leader, unfortunately this wouldn’t last long as at the halfway point of the race a LMP1 Toyota made an unsuccessful passing move, colliding with Porsche and sending it in to retirement.

“We fell behind in the first stint.” said Christensen. “Our engineers then opted for a different strategy – and Kevin drove an incredible stint. It was fantastic to watch how he fought his way to the top.

“I rejoined the race in third place, overtook the first Ferrari and had a collision with the Toyota. He came out of nowhere, completely unexpectedly, I couldn’t see him in the blind spot and so I had no chance to avoid the collision. Obviously, this is a disappointing way to finish the season.”

Kévin Estre added his thoughts, “We struggled initially. The first stint wasn’t good. Our engineers sent me back out onto the track with a modified strategy and that worked brilliantly.

“I managed to come from the very back of the field to first place. Michael also drove a strong second stint, but he was hit by the Toyota, unfortunately. The LMP1 guys sometimes try to overtake off the racing line and no one can anticipate that. Michael hadn’t expected him at that point. Unfortunately, that was the end of our race.”

“Unfortunately, our number 92 car was often hit by competitors. In 2018 we’ll return with the goal of winning the world championship.” added Dr. Frank-Steffen Walliser, Vice President Motorsport and GT Cars.