Stoffel Vandoorne: “It was a bit like driving a rally car” 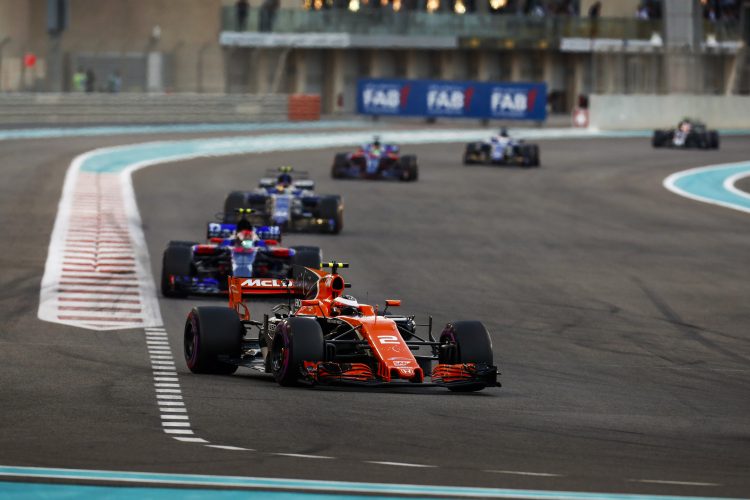 Vandoorne described his car as like a rally car during the Abu Dhabi Grand Prix. Credit: McLaren Media Centre

Stoffel Vandoorne described his McLaren-Honda Formula 1 Team car as a “bit like a driving a rally car” during the Formula 1 season ending Abu Dhabi Grand Prix.

Vandoorne, who had a “very difficult start to the race,” at the Yas Marina circuit from 13th place, said that: “there was some damage to the car – we were really struggling and something felt very wrong.

“There was no grip at all, the car was sliding around a lot and it felt like a big problem, so it was very tough from the beginning.”

The Belgian, competing in his first full season of F1 was able to bring the MCL32 home in 12th place after admitting that although “everything gradually got a little better, but I still felt uncomfortable in the car and the pace was nowhere near where it should have been.”

McLaren and Vandoorne were unsure about what the root cause was for the problems suffered during the race, but Vandoorne insisted that he and the team would “check exactly what happened.”

Vandoorne continued: “I was happy to see the chequered flag today and close off the season.

I think we maximised everything we had today to see the finish and keeping the cars in the pack behind us was the best we could have done under the circumstances.”

During the 20 races of the season, Vandoorne finished in the points three times, scoring a total of 13 points, just four less than his team-mate, Fernando Alonso during a difficult season for McLaren.

“It’s been a season with a lot of ups and downs,” said Vandoorne, “and in terms of results it’s not been the season we were hoping for.

“We had a lot of technical failures and grid penalties which meant we were lacking a lot of performance and track time.

During the season, Vandoorne, Alonso and Jenson Button during the Monaco Grand Prix weekend, racked up a combined total of 380 places worth of grid penalties, due to repeated Honda failures, but Vandoorne was confident of a better 2018 for the team.

“We’re looking forward to a fresh start next season,” he said. “We’re massively motivated for next year – there’s a lot of work to be done but we’re excited for a new challenge.”

Jake Nichol is a motorsport journalist writing about the Formula 1 world championship for The Checkered Flag. He is currently freelancing for Autosport, where his work includes IndyCar, NASCAR and UK-wide national race meetings.
Articles

By Paul Hensby
1 Mins read
Dan Fallows will join Aston Martin from Red Bull on 2 April after the two teams came to an agreement over his release from his contract with the Milton Keynes squad.
Formula 1

By Paul Hensby
1 Mins read
Masashi Yamamoto believes Honda made a mistake by leaving Formula 1 at the end of the 2021 season, particularly after they helped Max Verstappen win the Drivers’ Championship.