Team Penske Acura ended the seventh hour of the 2018 Rolex 24 at Daytona in first and second places but the team was outpaced and outraced by Filipe Albuquerque in the #5 Mustang Sampling Cadillac.

After taking over from Christian Fittipaldi in third place Albuquerque caught and passed the race leading #7 Acura of Helio Castroneves but pitted at the end of the hour.

The hour began with Mike Conway continuing to lead in the #31 Whelen Engineering Cadillac ahead of Castroneves and Fittipaldi.

Despite changing the car’s front nose in the pit-stops, Team Penske managed to jump the #31 and the newly installed Eric Curran and quickly pulled away.

Norris was thoroughly enjoying his first ever sports car race and was at times the fastest man on circuit.

This pace, coupled with the Ligier’s superior fuel economy saw them lead for a few laps after Castroneves stopped.

Norris handed over to Phil Hanson into the pit stops who piloted the #23 to sixth place at the end of the hour.

After Fittipaldi lost the lead during the rain shower, the newly installed Albuquerque was determined to take it back and swiftly delt with Action Express team-mate Curran.

Once in second Albuquerque quickly reeled in the Acura and was soon on the back of Castroneves.

Using the extra torque of the Cadillac V8, Albuquerque got a superior exit from the Horseshoe hairpin and allowing to pull alongside on the entry to the Kink.

Castroneves decided that going side-by-side through the Kink with 17 hours to go was unnecessary and just eased off the throttle to allow the #5 to blast by.

Once out in front Albuquerque quickly pulled away building up a lead of over five seconds before pitting just before the hour was up,  allowing Castroneves to regain the lead.

Team-mate Dane Cameron in the #6 machine ended the hour just behind his team-mate but just ahead of Albuquerque.

In GTLM Ford Chip Ganassi continued to dominant the dry running as Sebastien Bourdais in the #66 lead a Ford 1-2 ahead of Scott Dixon in the #67. 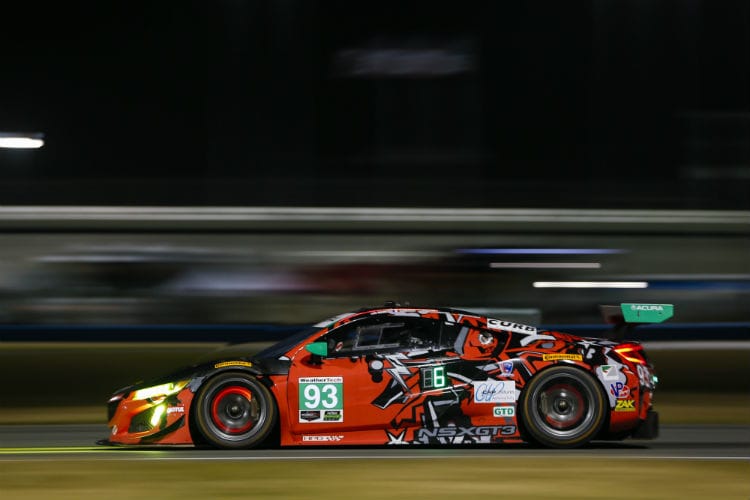 The alright pace the blue oval cars had over the rest of the field was demonstrated by the huge lead of a minute and a half they had over the third place #911 Porsche of Patrick Pilet before the pitstops.

Pilet fell back after the stops and Toni Vilander in the #62 Risi Competizione Ferrari took third place at the end of the hour.

The duel for the GTD lead continued between the #29 Audi of Kelvin van der Linde and the #33 Mercedes of Jeroen Bleekemolen but the Audi had built up a huge one minute lead.

Mario Farnbacher in the #93 Michael Shank Racing Acura held third place for the first half of the hour but claimed second after dispatching the newly installed Ben Keating after the pit stops..

By Josh Disborough
1 Mins read
Dinamic Motorsport have confirmed that they are once again to contest the Endurance Cup as part of the Fanatec GT World Challenge Europe Powered by AWS .
Endurance RacingNurburgring 24 HoursSportscars

By Josh Disborough
2 Mins read
After a disrupted 2020, Falken Motorsports have announced there 2021 plans as well as drivers which will take on the mighty Nordschleife.