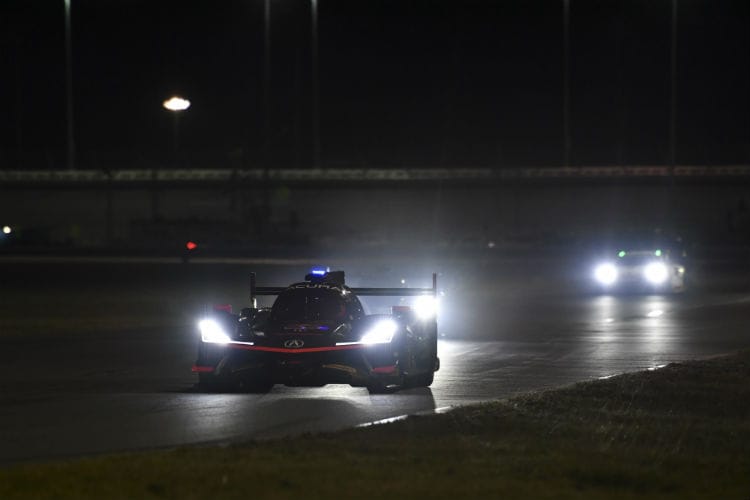 The Action Express Racing Cadillac outfit continued to set the pace as they ended the second day of the Roar Before the 24 Test quickest.

The team’s new recruit Felipe Nasr set the fastest time of 1 minute 36.973 seconds continuing the #5 Cadillac DPi-V.R run of being quickest in every session.

The session ended with all four of the Cadillac teams setting the first four fastest times, the quickest non-Cadillac, the #78 Jackie Chan DC Racing ORECA, was 0.2 seconds slower in fifth.

The final Saturday session was run during the night giving the teams their first chance to sample night time running.

This was an experience that Fernando Alonso had been looking forward too as racing at night is unique to the two-time F1 Champion.

Just like the day before, Alonso took it steady in the #23 United Autosports Ligier, setting a quickest time of 1 minute 38.857 seconds, before handing over to his team-mates Lando Norris and Phil Hanson.

The new Penske Acura squad’s pace had picked up from yesterday and set the 7th and 8th fastest times, with the #7 machine, piloted by last year’s Daytona 24 winner Ricky Taylor, setting a time of 1 minute 37.812 seconds just edging Juan Pablo Montoya in the sister #6 car by 0.045 seconds.

In GTLM for the second day in a row it was a closely fought contest between the Porsche and Ford teams.

The #66 Ford GT of Sebastien Bourdais ended the day on top with a time of  1 minute 43.798 seconds, 0.6 seconds faster than 2nd place man and the quickest of the Porsches Gianmaria Bruni in the #912 car.

Their team-mates the #67 and the #911 took up the remaining spots in the top four with the #4 Corvette the first non Ford and Porsche in fifth just 0.2 behind the #911.

In GTD the Lexus 3GT team rose to the fore with its two RCFs taking first and third places in the overall standings at the end of the day, setting their quickest times in the final night practice session.

Splitting the two Lexuses was the quickest crew from the previous day, the #11 Grasser Racing Team which finished the day 0.3 seconds behind Baumann.