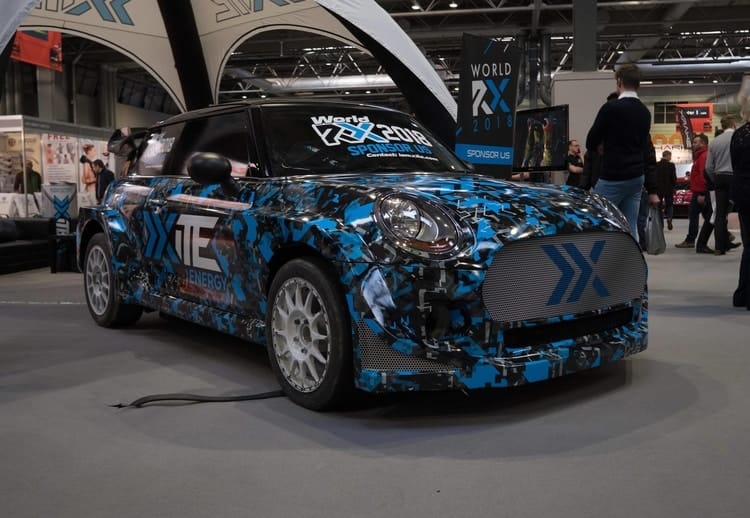 After announcing plans at the 2018 Autosport International Show to make his full-season debut in the 2018 FIA World Rallycross Championship with a xite Energy branded Supercar, Oliver Bennett took some time out to speak to The Checkered Flag about the season ahead.

“I enjoyed a good first year after throwing myself in the deep end, but the move came about after competing in the 2017 World RX of Great Britain and having a decent showing during the weekend.

“After that I decided that if I could iron out a few issues with the car and also gain some more seat time, then why not move up to the World stage and compete with the best.”

As World RX enters its fifth season of competition, what are your objectives for the coming season for both yourself as a driver and also for the new Mini Cooper S Supercar?

“Part of the reason for me entering this year is the way that the Manufacturers are involved means that the competition will move further and further out of the Privateers hands.”

“I feel that this year could be the last year where you can enter World RX with a well thought out and well built Supercar that will still be able to challenge the more established teams in the series and give them a run for their money on a fraction of the budget that they use.”

There is the chance that the Xite Racing Ford Fiesta could be used in Euro RX during 2018. Credit: Team RX Racing

With the choice decided to use the new Mini Cooper S Supercar, what led to this decision and to not use an established BMW Mini World RX Supercar?

“In terms of using a Mini, we are a British team with British funding and it makes sense to use a well known British Brand so Mini fits the bill perfectly. From a Marketing and Branding point of view, the Mini Cooper S are aimed at the younger generation and Rallycross also seems to fit that brief as well.”

“Secondly from a package point of view, everything fits perfectly for whats required in a Rallycross Supercar. The wheels are ideally placed within the dimensions of the car, the weight of the car is at a minimum and its the ideal chassis for competing in Rallycross competition.”

How did the deal come about for Simpson Motorsport and LD Motorsport to be involved in the build and development of the new Supercar?

“When the two parts come together, its very clear that both parties are able to design, build and engineer a World class Rallycross Supercar quite easily and readily. It made more sense to begin with a brand new car instead of buying a second hand car that has seen action and may potentially have flaws that you can’t overcome straight away.”

Whilst the Mini competes in World RX, there are options open to see the Ford Fiesta Supercar in action during 2018 as well. Credit: Craig Robertson

With the Mini Cooper S being used for World RX Competition, will the Ford Fiesta Supercar see action this year as well?

“We’re looking at using the Ford Fiesta in some of the rounds for the 2018 Toyo Tires MAS British Rallycross Championship, with the main aim being to give me more seat time during the year. However we’re also looking at several other options as well.”

“These include renting the car out to any drivers that are interested in competing in British RX, the chance to compete in several rounds of the FIA European Rallycross Championship and using the car as a backup incase the Mini is unable to compete during the year.”