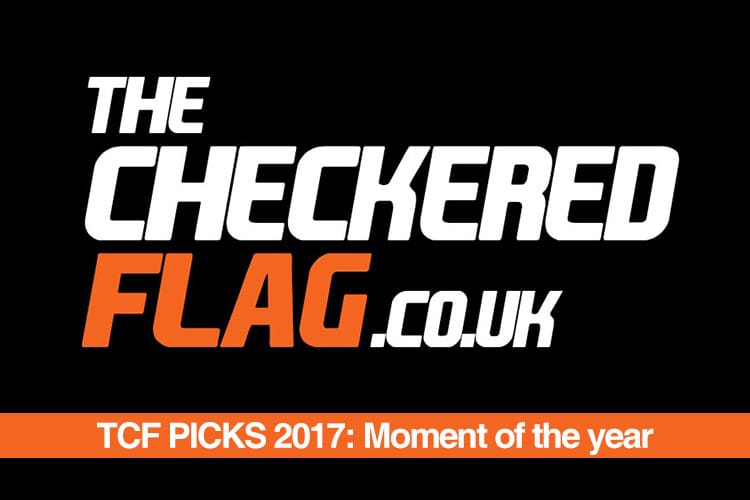 The team complete ther look back over the 2017 season with their selection of moments of the year.

Fernando Alonso at the Indianapolis 500

Fernando Alonso announcing his Indianapolis 500 entry with Andretti and McLaren. Perhaps the most shocking news when it was announced back in the Spring, Alonso’s decision to miss the Monaco Grand Prix to pursue his dreams of securing the Motorsport triple crown was incredible. Not only did it showcase IndyCar to many Motorsport fans who may never have seen it, but it also showed, yet again, what an incredible driver Alonso is; with the Spaniard leading and remaining competitive in the race until – rather predictably – his Honda engine let go.

Billy Monger’s accident (and his road to recovery)

A crowdfunding campaign has been set up in the name of Billy Monger (Credit: JEP)

Speaking to Tom Ingram on the Sunday evening at Donington Park in April, the mood was a hugely sombre one as we spoke about our genuine emotions that day.

Fighting back the tears, he explained how good a racing driver and a personality Billy Monger really was, just hours after the youngster was involved in a horrendous British F4 accident.

His bravery and personality shone through most of all, even getting back into a race car in the same year. His remarkable story has initial traces of Alex Zanardi, and we are grateful to still have him as part of the motorsport family.

One fateful afternoon at Donington Park in April would change Billy Monger’s life forever, with a devastating, freak incident leading to him becoming a double amputee, sending shockwaves through not only the TOCA paddock but also the wider motorsport community.

The response from around the world was astounding and a record-breaking crowd-funding effort remarkably raised over half a million pounds in less than 24 hours, and it was then at the next BTCC meeting at Thruxton that the paddock and fans got to show their support in person with a fundraising track walk.

They certainly turned out in force with an incredible show of solidarity for the teenage racer, with the sight of the whole Thruxton pitlane being full of people bringing tears to many eyes, whilst the view of the train of people snaking from Church corner all the way back to the Complex was one I will never forget.

The whole evening was a fitting show of support for a truly inspirational young man, and more memorable moments have followed with Billy’s return to the TOCA paddock at Oulton Park, his first time back behind the wheel of a race car and his heroic walk down the pitlane at Brands Hatch on the finale weekend.

The recovery made from Billy and his eventual return to the race track was outstanding, proving the endeavour of the human spirit. It was his sheer determination that means that while his life will never be the same his chances and ability are in no way limited.

Leon Haslam – A Champion and a Sportsman

The astonishing 170mph brake failure that cost Leon Haslam the British Superbike Championship was one of the moments of the year in itself. It still defies belief that the JG Speedfit Kawasaki rider escaped serious injury but what followed was one of the most heat-warming pieces of sportsmanship I’ve ever seen in motorsport.

Aided by his father, and his mechanics, Haslam approached newly-crowned champion Shane Byrne to offer his congratulations, broken wrist, broken ankle and all. It was an emotional end to a thrilling championship battle which showcased two of Britain’s finest motorcycle racers, both true ambassadors for their sport.

The start of the 2017 FIA Formula 1 Singapore Grand Prix

This was the incident which pretty much gave the title to Lewis Hamilton. Saturday was a nightmare for the Brit, as he could only manage to qualify fifth on the grid. Meanwhile, Sebastian Vettel would start on pole, with Max Verstappen and Kimi Raikkonen behind him.

Sunday was to be a completely different story. As the lights went out, Vettel immediately drove towards the left to block the charge of Verstappen. The knock-on effect however was for the Red Bull driver to also vear left, clipping Raikkonen in the process. This sent the front of the Ferrari right into the side of his teammate, causing damage to both cars. Raikkonen’s out of control car would take Verstappen and Fernando Alonso out of the race at turn one. Vettel would spin out of the race moments later, thanks to the damage caused. In a matter of moments, the championship battle was flipped on its head.

Ferrari would never truly recover from this incident and Hamilton went on to clinch his fourth title.

Both Scuderia Ferraris suffering punctures towards the end of the British Grand Prix, leaving an untouchable Lewis Hamilton to take an emphatic home win. Summed up the season to a degree; both Ferraris looking fast and like possible challengers, before misfortune from an aggressive strategy backfired.

The moment of the year for me was Kevin Hansen drifting his car all the way around the outside of the tussling pack at the World Rallycross in Cape Town. Bearing in mind he was in last as they got off the line, in last year’s spec car, it was a fearless and brilliant move that saw him go straight to first and maintain the win. It was undoubtedly one of the best overtakes of the year.

In a blue riband event that almost every touring car fan watches every year, Bathurst is known for putting on a show and challenging the drivers and teams of the Virgin Australia Supercars Championship who tackle Mount Panorama and hope to leave with both the win and the glory of taming the Mountain.

For Betty Klimenko and her small Erebus Motorsport operation, the highlight of the year will surely be seeing the Penrite sponsored Holden Commodore coming over the finishing line first after tackling challenging track conditions, multiple safety car periods and racing the best in the business for over 1000kms. Everyone loves a good luck story in Motorsport and in 2017, Bathurst duly provided.

Mike Rockenfeller fighting through the pain

During the second race at the Norisring for the DTM Series, Mike Rockenfeller was involved in a huge crash with Gary Paffett. The German was obviously injured and limped away from his damaged Audi. It was not known whether Rockenfeller would be fit to race at the Moscow Raceway with Audi putting Nyck de Vries on standby. However, Rockenfeller return in Moscow and in some style by coming second in the first race and hobbled his way to the podium on a pair of crutches a testament to the strength of the man.

The dying minutes of round 2 and the bump and run which, (in my opinion) decided the championship.

See the Spirit of Race Ferrari was looking for a way past the #31 Team Parker Racing Bentley and rather than biding time and waiting for a mistake from the Cheshire machine, the Ferrari opted to hand out a bit of Seb Morris-esque roughness and barge its way through. Then there was a safety car, then there was a time penalty, then there was a wave by and finally, the only way to redress the compounded mistakes was to give the Ferrari a post race penalty and give the win to the Bentley.

Had the Ferrari not bumped and been penalised, the Bentley would have gone into the final round 5 points down not 10 points up. And its always easier to defend a lead than come back from behind.

There are rare opportunities for Formula 1 drivers to interact with the fans, and for the fans to witness Formula 1 machinery close up away from a circuit environment, but ahead of the British Grand Prix, thanks to Liberty Media, nineteen of the twenty 2017 drivers took part in F1 Live London, with approximately 100,000 fans flocking to Trafalgar Square.

There were musical acts from the likes of Little Mix, Bastille and the Kaiser Chiefs, while historic cars from the McLaren F1 Team and Renault Sport Formula 1 Team were joined by more recent designs from the like of Red Bull Racing, Scuderia Ferrari, Mercedes AMG Petronas Formula One Team, Scuderia Toro Rosso and Williams Martini Racing in running round a makeshift ‘circuit’, to the delight of the fans.

It was a great evening for fans and for Formula 1, with more events like this planned for the future, it should open up the world of F1, something that the fans have been craving for years.

Sebastien Buemi’s remarkable rant at the end of the first round of the Montreal ePrix, where he marched up and down the pit lane (wrongly) accusing nearly every driver on the grid of having driven in to him on purpose. It was a great example of how much the championship meant to him, and the severe pressure he was under as his chances of a second title were slipping through his fingers. He never recovered from that outburst, and a disappointing qualifying the next day meant that he lost out to di Grassi despite having led the championship from the very start.