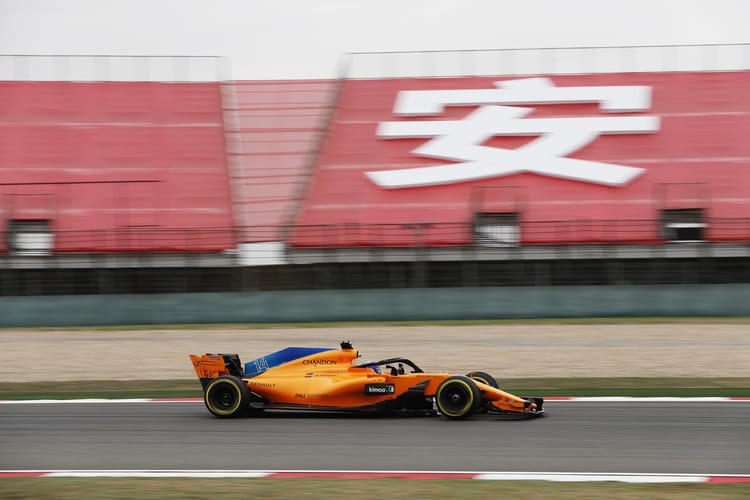 Eric Boullier was pleased that his McLaren F1 Team were able to show their “fighting spirit” as they continued their trend of scoring points in ever race so far this season.

The McLaren’s had struggled in qualifying as both Fernando Alonso and Stoffel Vandoorne failed to reach Q3 but Alonso made up for it in the race.

“While today was the tough race we expected, we were still able to show our fighting spirit and bring home some more valuable points.” Said Boullier.

Alonso secured seventh place to move onto twenty-two points for the season as he made it three points scoring finishes in the first three races.

“Fernando made a good start, and was up to P11 by the end of the third lap.

“He managed to maintain strong pace compared to those around him despite the Safety Car period, executed a good strategy, and made a couple of stunning overtakes in the final stages of the race to cross the line in seventh.”

Vandoorne had a trickier time of things in Shanghai and was unable to add to his points total as he finished in thirteenth place.

“On the other side of the garage, Stoffel wasn’t as lucky today.

“He had a slow start off the line and found himself with an uphill struggle after losing a couple of places.

“He responded strongly though, making some solid overtakes and managing his tyres well.

“In the latter stages, when his competitors were on fresher rubber, he battled hard in the midfield despite suffering from a strong vibration which made the final laps tricky to manage.

“He gave it everything to finish in 13th but it was a tough day for him, and we hope for better fortunes in Baku.”

McLaren were one of many teams that tried the one stop strategy but the timing of the safety car caused them problems, however, Boullier was pleased with the car overall.

“We opted to run a one-stop strategy today with both drivers, knowing that our tyre management showed good potential.

“Unfortunately, we were a little bit unlucky with the Safety Car as many of the cars around us took advantage of the window to pit.

“Still, we fought hard, proved to be opportunistic and used the strengths of our package to our advantage to come home with six more points.

“Now, we head back to the factory after a long stint away, to regroup and work on preparing ourselves for the next race in Baku.”