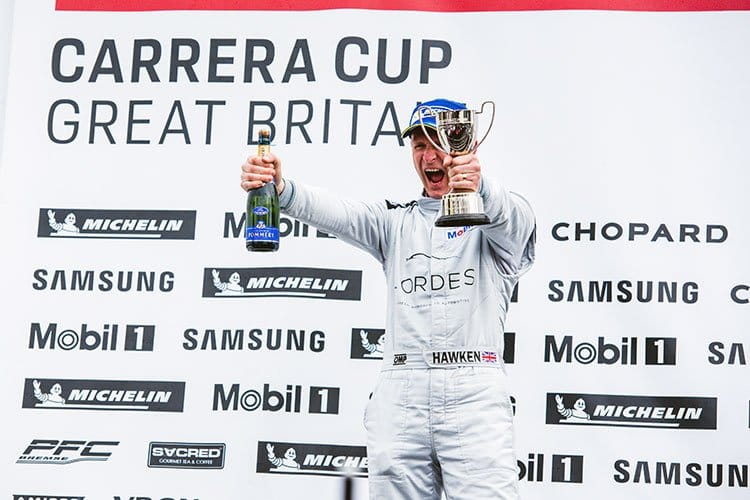 Former BTCC racer Richard Hawken made his début in Porsche Carrera Cup GB last weekend at Brands Hatch and managed to secure a podium finish in the second race as the series got the 2018 season underway.

With limited testing before heading in to qualifying Hawken had a lot to learn with the DVF Racing with Slidesports squad, and despite finishing last showed steady improvement throughout the session.

Hawken admits that it was a mistake on his part that he faded in qualifying, “I stayed out too long on my old tyres. Once changed I only had a small handful of laps left and couldn’t bring my fronts in. Meanwhile the track got quicker.”

A wet first race saw the Lordes-backed driver climb as high as seventeenth overall and fourth in the Am class, challenging for the podium. Unfortunately during the closing stages of the race, a punt from behind through Druids would see him fall to sixth in class and nineteenth overall.

For the second race of the weekend Hawken managed to stay out of trouble as the mixed weather conditions proved slippery for some competitors as he battled with Peter Kyle-Henney for the final Am class podium position.

With weather conditions worsening and stranded Porsche’s on track the race was ended early under a safety car, meaning Hawken would hang on to his podium spot and take home some silverware on just his second race of the series.

“The first race in the wet was good, we made a lot of progress and I learnt a lot,” said Hawken. “In the second race everything Chris [Jones, driver coach] has said to me started to come together. I gained a few positions making a lightning start which I was proud of. I was swapping places a lot, but I’m quite glad the safety car came out at the end as it was getting really slippery on slick tyres.

“It is an unbelievably enjoyable first weekend and to win a trophy – you couldn’t ask for a better start. If you’d said to me on Thursday night that I’d be coming home with a trophy I’d say, ‘come on, be realistic.’ With listening to the team and applying what they say and doing what we can it is starting to come together.”

Team Manager Mark Jenkins added “Richard has had a steady progression in performance and feedback, so to see him on the podium was big for us. In short it was brilliant; the team is running as smooth as ever and I am proud of everyone.”