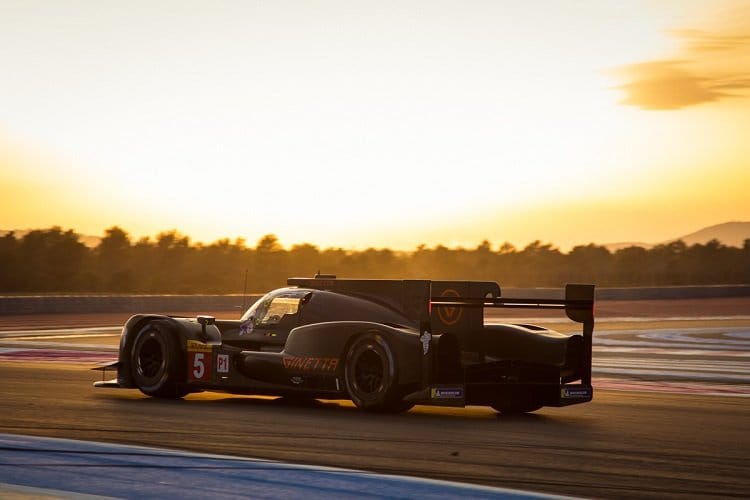 Credit: Craig Robertson / Race Photography
Priorly known as Manor CEFC Racing, CEFC TRSM Racing completed a test with their new Ginetta G60-LT-P1 before last weekend’s FIA World Endurance Championship Prologue. It was at the Prologue that Ginetta delivered the second car to the British-run team, and the squad were very happy with their first two-car test ahead of the 2018/19 ‘Super Season’. The two cars completed 259 laps around Paul Ricard during the 30-hour test.
Oliver Rowland and Alex Brundle were on duty in the #6 at the Prologue, whilst the team worked on getting the #5 up and running. Just before the eight hours mark, the second CEFC was out on track, setting its first laps.
Ginetta driver Charlie Robertson was first to break in the #5 CEFC TRSM. The team focused on night-time running whilst giving the chance for new signings Dean Stoneman and Leo Roussel to get a feel of their new competitor. Ginetta’s Mike Simpson took the wheel in the middle of the night to make some tweaks to the car’s lighting system.
The cars finished 7th and 9th out of the 35 cars that took part in the pre-season test. #6 set a positive time, only one hundredth of a second off the fastest Toyota Gazoo Racing when it was set up in race trim.
Ginetta’s Technical Director Ewan Baldry said: “I’m delighted to have both cars here and that’s a huge credit to the whole team.  Every single lap of experience we get with the cars is hugely valuable and their hard work in getting a very new car on track made a major contribution to getting the laps in last night and again today.
“Working alongside the CEFC TRSM team has been excellent. Their people and ours worked brilliantly together, again a huge advantage with such a new car. There is plenty of performance to come from the car, and I can’t wait to see what we see when the car runs with its low downforce aero package.
“Before then though we are going to be very busy learning from the experience here, we know what needs to be worked on now.  We have a few long nights ahead of us before Spa.”
Ginetta Chairman Lawrence Tomlinson was also happy with the result of the test, having spent most of it in the CEFC TRSM garage: “To arrive here and see both the cars in the garage was a proud moment.  I know how hard the Ginetta people have worked to get to this point and everything I have seen from the CEFC TRSM team has shown me that the same applies to our customers too.
“We are extremely serious about the objectives for this car, and very serious too about the way we want to support our customers. We are fully focused now not on the times from this test, but on what needs to happen between now and the first race in the season at Spa to get the best possible result in terms of performance and reliability is what looks set to be a really close season in the World Endurance Championship.”
Share