Ollerenshaw: “There is a Lot of Potential to Build On” 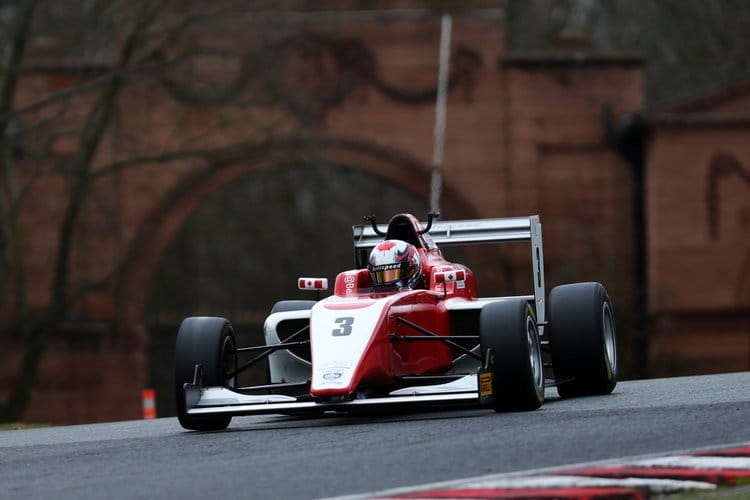 After dropping their partnership with Cliff Dempsey Racing for the season, the Hillspeed outfit entered the opening BRDC British F3 Championship round with two drivers. They left Oulton Park with 43 points and clear goals for the year ahead.

With German driver Josuf Owega too young to compete at the Cheshire round, it was left up to Sasakorn Chaimongkol and rookie Ben Hurst to lead the team away.

Thai driver Chaimongkol has been associated with BRDC F3 for over two years now, having hinted at an entry to the series back in 2016. While he did compete in the Autumn Trophy that season, he’s spent the last year racing in Asia. The experience clearly paid off, as he picked up a top ten finish in the opening round.

Chaimongkol, also known as “Cutter” continued his consistency, but recording two eleventh place finishes in the rain affected Monday encounters. The reverse grid race two had seen the whole field flipped. This meant that Hurst started from the front row in his second F3 race. Sadly for the Canadian, he struggled to master the conditions, slipping to twelfth when the flag came out.

“Neither Cutter or Ben had even seen Oulton before the pre-event test so we’re very pleased with their performances throughout the weekend, particularly when you consider the weather they had to contend with”, commented Hillspeed team principal Richard Ollerenshaw.

“It was good to see both drivers chalking up finishes in all three races and we know there is a lot of potential to build on as the season progresses. The weather was very challenging, especially at a circuit as demanding as Oulton, but they did a good job and we’re now looking forward to getting some more testing under our belts before the next rounds at Rockingham at the end of the month.”

How Zak O'Sullivan can win the GB3 Championship between rounds

By Michael Callander
2 Mins read
Zak O’Sullivan might be able to take the GB3 title before turning a wheel at Donington Park. TCF takes a look at the numbers behind the title race.
British F3

Bilinski bounces back to dominate at Oulton Park, O'Sullivan on brink of GB3 title

By Michael Callander
3 Mins read
Roman Bilinski shook off a Race 2 penalty to win Race 3 at a soaking Oulton Park, as Zak O’Sullivan came tantalisingly close to securing the GB3 title a round early.
British F3

By Michael Callander
2 Mins read
Luke Browning took his first GB3 Championship win in Race 2, benefitting from a red flag to take top honours despite a spin in the latter stages.