“The only thing we can say to the team is sorry,” – Daniel Ricciardo 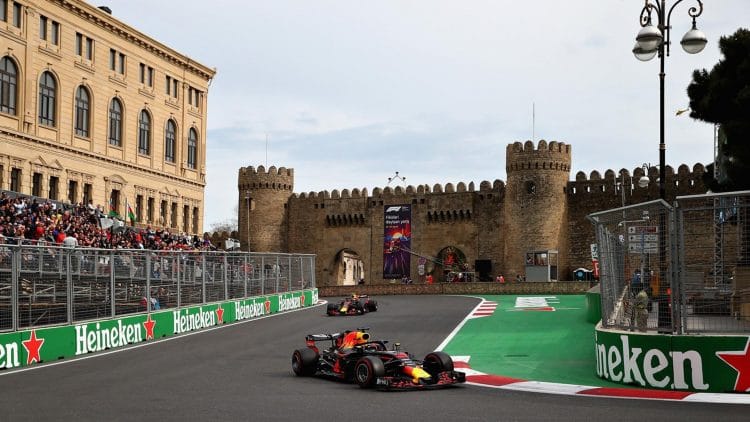 Ricciardo (3) lost track position to Verstappen in the pits, and then made contact on Lap 41. Credit: Red Bull Racing

Daniel Ricciardo has apologised to his Aston Martin Red Bull Racing Formula 1 team for the Turn 1 crash between himself and team-mate Max Verstappen that took both RB14s out of the Azerbaijan Grand Prix.

Ricciardo was running in fifth place, having just been overcut by Verstappen in the pits, when he got into the tow down the 2km pit-straight at the Baku City Street Circuit.

Through a combination of Verstappen defending position and Ricciardo’s misjudgement, the Australian rear-ended his team-mate, in the Turn 1 braking zone,  eliminating both.

The crash was the culmination of a race-long battle between the two that had been bubbling almost from the start.

Earlier in the race, Ricciardo had tried to pass a slow Verstappen, but was forcibly rebuffed. The two even made light contact at Turn 1, in a fair move.

But after a meeting with Red Bull bosses immediately after the incident on Lap 41, Ricciardo apologised to the team for the crash.

He said: “I have watched a few replays and the only thing we can both say is sorry to the team. For sure it was a chaotic race, and I guess we caused most of that. It is the last thing we wanted.

“We want to be able to race, and I’m thankful that the team let us race, we tried to keep it clean and give each other room, but were racing hard and in the end, it cost us.

“I’m not going to talk about the incident but this was the worst case scenario and everyone is pretty heartbroken.”

Drivers to apologise at the factory

Team principal, Christian Horner made clear after the race that both drivers would be expected to apologise to the entire team, back at the Milton Keynes factory, in person, and this is something Ricciardo is happy to do.

“I will personally apologise to the team,” said 28-year-old Ricciardo. “Once again I’m just sorry we are all in this situation when everyone has worked so hard to give us a good car.”

It is the second time in the 2018 season that both Red Bull cars have failed to finish a Grand Prix, with the other being in Bahrain where an engine shutdown put Ricciardo out, while accident damage accounted for Verstappen.

Red Bull sit in third place in the constructors’ standings, on 55 points, already some 59 behind leaders, Mercedes AMG Petronas Motorsport.

Following his win in China last time out, Ricciardo moved on 37 points, with Verstappen on just 18, after a difficult start to the season, which has involved contact in all four races thus far.