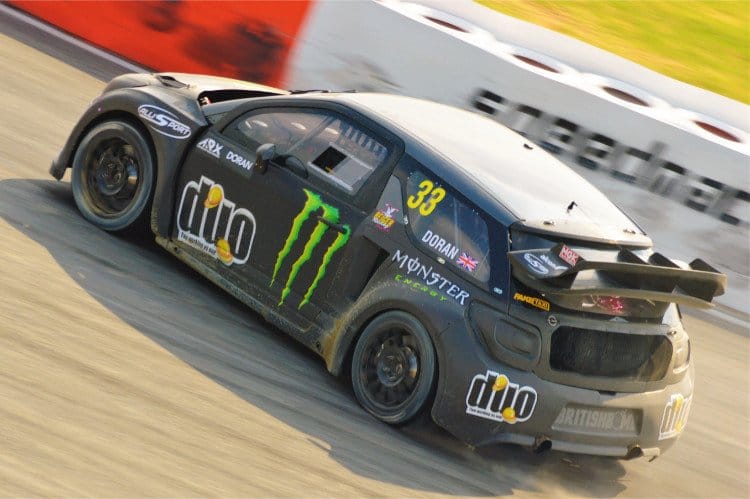 The now defunct Global Rallycross series almost always used temporary tracks, built in the days leading up to each event. One of the biggest criticisms of the former series from rallycross purists was the poor driving standards, something Doran feels was down to the nature of the tracks rather than the drivers.

“I don’t ever blame the driving standards in GRC with how bad it was, I blame the tracks,” he said. “I think that the new track layout and the new racing style will solve a lot of those problems.”

Doran had a tough battle with Scott Speed in the final of the season opener at Silverstone, resulting in contact a number of times, but both were ultimately able to complete the race and finish on the podium.

“I’m happy with racing those guys and as shown with Scott Speed in the final.” he said. “We railed each other for a lap – we were budging, we’ve got tyre marks down the side of each of our cars, and we got round the track, we both got out of it on the other side.”

“That’s the way you have to do it, that’s why rallycross is cool, and that’s why it’s my favourite sport and my favourite thing to do in the world,” he added. “It’s when you have to pull off because your wheel’s hanging off when it shouldn’t happen.”

By Pontus Lindroos
7 Mins read
In our new mini-series ‘The Road To Glory’, The Checkered Flag’s Pontus Lindroos interviews upcoming rallycross talents about their stories and racing career so far. First out is the young American talent Lane Vacala.
Americas Rallycross ChampionshipOff RoadOtherRallycross

By Nigel Chiu
1 Mins read
The ARX journey comes to a close with the championship officially coming to an end.
Americas Rallycross Championship

By Jack Cunnane
1 Mins read
Volkswagen retire the Beetle R from ARX after a five-year stint.