Palmer Makes It Six Of The Best With Brands Double 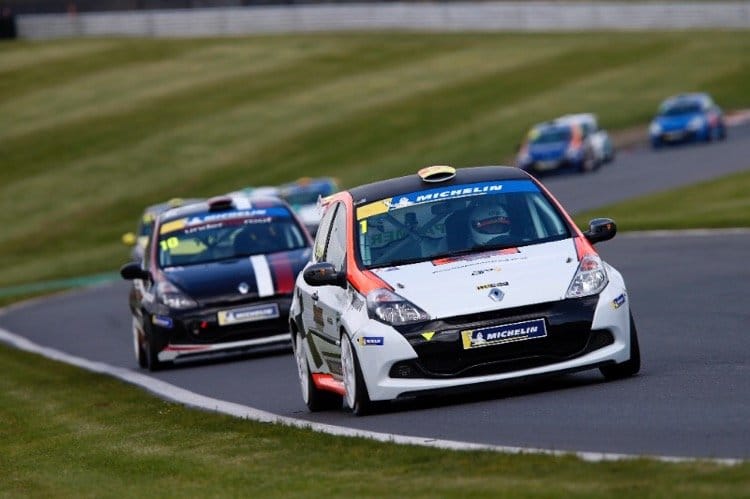 Ben Palmer has continued his 100% winning start to the 2018 Michelin Clio Cup Series with a pair of victories at Brands Hatch this past weekend.

Palmer’s double success makes it six wins in six races so far this year for the reigning champion, securing him a thirty-two point championship lead as it stands.

It was Ronan Pearson who was fastest in a wet qualifying session for his first pole position in the series, while Palmer secured top spot for race two.

Pearson’s hold on the lead was brief in race one however, with Palmer getting past heading through Paddock Hill Bend for the first time.

From there Palmer was untouchable as he led every lap for the rest of the weekend, securing 2.5 and 3.5 second successes around the Indy circuit.

Pearson was left to battle with Tyler Lidsey for second in race one, with a post-race five second penalty for Lidsey eventually giving the spot to Pearson.

That was Pearson’s third consecutive podium finish and Lidsey’s first of the year, with Simon Freeman and Finlay Robinson completing the top five.

As Palmer stormed clear in race two, Lidsey ran second throughout while Freeman was on course for a podium until late mechanical issues.

That gave John Hamilton a third podium finish of the campaign after he got the better of Pearson early on, the latter finishing ahead of Ben Colburn.

Colburn’s top five finish was a reward for a great effort by the Westbourne Motorsport, as they swiftly repaired his car following a big race one accident.

In the Road Series, reigning champion Nic Harrison was the cream of the crop ahead of James Colburn, who was making a guest appearance in the series.

Harrison led from lights to flag in race one, though Sean Thomas loomed in his mirrors late on after getting the better of Colburn .

Colburn took the race two win, but as a guest driver not scoring points, it was Harrison who took a sixth consecutive maximum points haul in second place.

James Joannou edged out Tom Oatley in a photo-finish for fourth in race one, before he benefitted from a issue for Thomas to take a race two rostrum.

The 2018 Michelin Clio Cup Series is back in action at Thruxton in Hampshire on 7/8 July.

All change at the top of the Renault UK Clio Cup standings...

James Colburn to make one off Clio Cup appearance at Croft