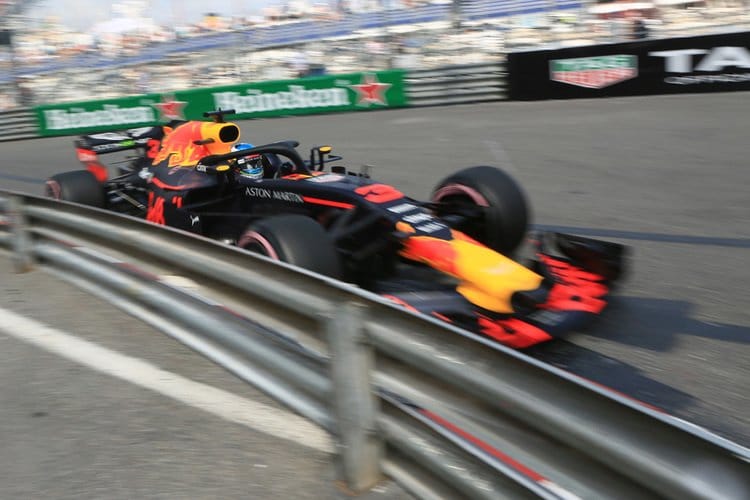 Team-mate Max Verstappen had been leading the session, but it was Ricciardo who was the first driver into the 1.11 lap times, with the new hypersoft tyre showing just how fast it could be. Verstappen stayed second quickest for the remainder of the practice, with Scuderia Ferrari‘s Sebastian Vettel in third.

Lewis Hamilton could only manage the fourth quickest time of the day, with team-mate Valtteri Bottas in sixth. The Mercedes AMG Petronas Team duo were separated by last year’s pole man,  Kimi Räikkönen.

Best of the rest fell to Renault Sport Formula One Team‘s Nico Hülkenberg who put in the seventh quickest time, followed closely by McLaren F1 Team‘s Stoffel Vandoorne and Fernando Alonso in eighth and ninth. Rounding out the top ten was Carlos Sainz Jr.

Red Bull Toro Rosso Honda‘s Brendon Hartley had a good session, finishing in eleventh quickest and faster than team-mate Pierre Gasly, who could only manage the fourteenth fastest time of the practice. Twelfth and thirteenth quickest were the Sahara Force India F1 Team drivers, with Sergio Perez just managing to get the better of Esteban Ocon.

Williams Martini Racing look set for another difficult weekend, with their best time coming from Sergey Sirotkin in fifteenth. Another team who looked surprisingly off the pace was Haas F1 Team, with Kevin Magnussen putting in the sixteenth quickest time of the afternoon, and Romain Grosjean eighteenth. Filling in the gap between them was Alfa Romeo Sauber F1 Team‘s Charles Leclerc.

At the back of the pack, in nineteenth and twentieth, were Lance Stroll and Marcus Ericsson, with the former complaining of knee issues late in the session.