Audi confirm Abt for season five 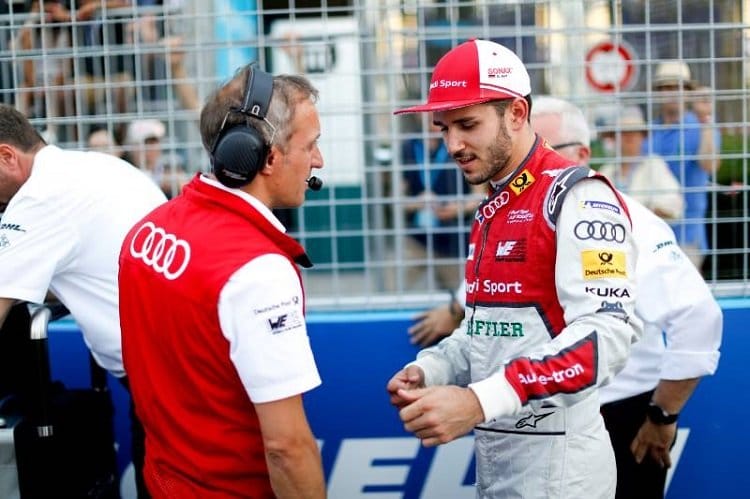 Audi Sport Abt Schaeffler have confirmed Daniel Abt alongside Lucas di Grassi for the 2018-19 season.

The German driver revealed after his win at the Berlin ePrix that he was still to sort out his contract for next season, and the team acted swiftly to tie him up by activating an extension they had in his current agreement.

It’s a just reward for Abt after he showed a huge turnaround in form this year to comfortably outperform his world champion team-mate di Grassi.

This has included his first win in Mexico City, his victory in Berlin, and the win he lost in Hong Kong after a technical infringement from the team.

Were it not for that disqualification Abt would have been in the fight for the driver’s title, but regardless of this he has proved that Audi were right to retain him after his father, Hans-Jurgen Abt, handed over the reigns of the team to the German manufacturer.

Speaking to Autosport about his new contract Abt said that it was the talk in the media that led to Audi making the move to secure his contract.

“[This] was my ideal plan – and with this season and especially also with the last race that helped to convince people,” Abt said. “I’m very happy.

“For [Audi] it was maybe more clear what they wanted for next season than for me, but I just said ‘as long as things are not outspoken and not written I cannot speak about season five if I don’t have it 100% confirmed’.

“Maybe you guys [the media] helped a bit – in the end it was OK. We’ve talked about it and it’s all done now.

“They came to me because they read the articles and said ‘look Daniel, for us we thought it was more or less that you will stay with us’ and I said ‘OK, maybe for you, [but] not so much for me’ and then we just worked and now it’s all sorted.”

McNish said, “It was in process, it was always part of the plan.

“Just to make sure that everybody was clear and he didn’t have any unnecessary questions, because we need him to focus on winning Zurich and New York.”

Mercedes’ Ian James: “Puebla offers us two opportunities to show what we are made of”

By Paul Hensby
1 Mins read
Ian James says Mercedes are looking for a return to the points after missing out completely in Monaco last month.
Formula E

Nyck de Vries: “The first half of the season was marked by many ups and downs”

By Paul Hensby
2 Mins read
After a pointless Monaco, Nyck de Vries and Stoffel Vandoorne are aiming for big points this weekend in the Puebla E-Prix.
Formula E

Jaguar’s James Barclay: “We know qualifying and consistency of race pace is key”

By Paul Hensby
1 Mins read
James Barclay is hoping Jaguar Racing can fight at the front of the field in both races of the Puebla E-Prix this weekend.