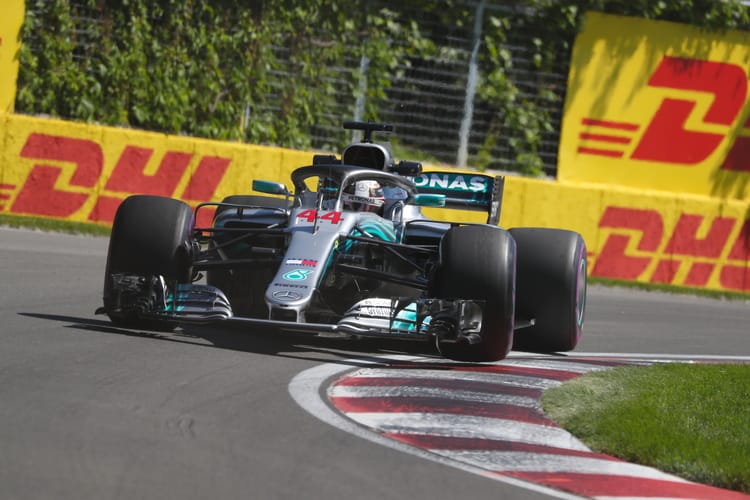 Lewis Hamilton believes it was only tyre choice and not anything else that was the reason why he finished second and fourth in first and second practice on Friday ahead of the Canadian Grand Prix.

The six-time race winner at the Circuit Gilles Villeneuve enjoyed driving the track again and was a fan of the third DRS zone in operation this year.

“It’s been a beautiful day, the weather has been fantastic and the track feels better than ever.

“It’s such a fun track to drive and we didn’t have any problems, I really enjoyed it.

“A lot of fans came out as well so it’s been a nice Friday.

“The fact that we now have an additional DRS zone in Montreal means that we can think about running more wing this year.

“In previous years we would run a low downforce setting here, whereas now it’s kind of normal, so the car feels great through the corners.”

Hamilton was pleased straight away with the set-up of his Mercedes AMG Petronas Motorsport and believes his team got it right early on.

“Straight out of the box today I think we started right with the car set-up.

“There were some things that we needed to adjust along the way making small incremental changes, from one time-out to another it always felt a bit different, but it’s been good.”

Both Hamilton and team-mate Valtteri Bottas failed to use the hypersoft tyre and the reigning champion hopes that is the reason they are behind and that they are not too different from the super and ultrasoft tyres the Mercedes used in first and second practice on Friday.

“I believe that the gap in the time sheets is down to the different tyre choices today, but we will find out tomorrow.

“Hopefully we’ll get a good feeling when we first take the HyperSofts for a spin in FP3 tomorrow and it’s not too different to what we’ve been driving today.

By Paul Hensby
2 Mins read
Valtteri Bottas was more than three-tenths of a second faster than Lewis Hamilton in opening practice for the French Grand Prix on Friday.
FeaturesFormula 1

By Jasmine Butler
5 Mins read
In the first triple-header of the season, we head back to France, a race that was also missed off the 2020 F1 calendar.
Formula 1

"It's looking very close at the front" - Toto Wolff

By Nick Golding
2 Mins read
Mercedes move into the French Grand Prix relieved to be moving away from the streets and back to one of their most dominant circuits, Hamilton has won both races at Circuit Paul Ricard since it returned to the calendar in 2018, a third win would do very nicely for the world champion.