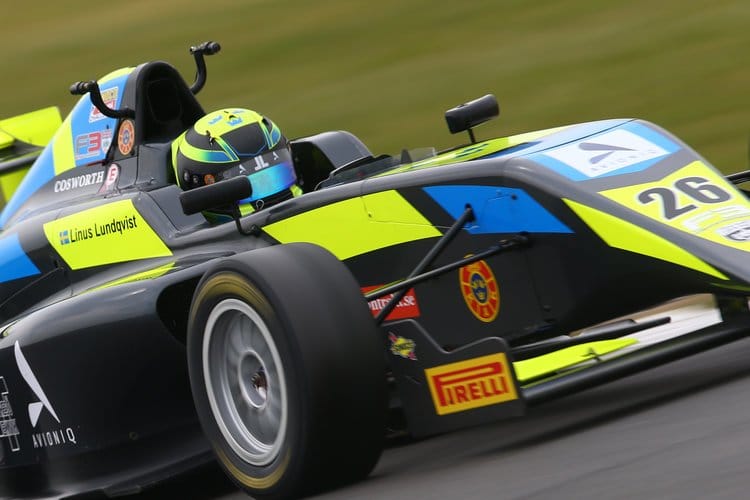 On pole for the highlight weekend of the BRDC British F3 Championship season will be Swedish driver Linus Lundqvist. The Double R Racing star continued his Friday pace to ensure that he has every possibility to extend his points lead this afternoon.

With testing limited this weekend, it was a first for many drivers as they turned the car up to full power. After a poor Friday in terms of timing it was Kush Maini who topped the early stage of the session, with times quickly falling.

Lundqvist joined the battle, but got his first time deleted for track limits. This didn’t stop him though, moving back into contention along with Jordan Cane. Both Cane and Lundqvist pushed the Indian who remained the man to beat for most of the running.

A late lap from Lundqvist though pushed him ahead by 0.051 seconds, holding on as both him and Maini pitted before the end due to their tyres reaching their peak.

On his return to the series, it was a third place for Clement Novalak. The Carlin driver, who has been busy in the Eurocup Formula Renault becomes the highest placed Brit ahead of Cane, who also pulled in before the flag.

It was an equal best result for Billy Monger who takes fifth ahead of Jamie Chadwick. Both drivers have failed to return to the podium after their flurry at the opening round and will know that Silverstone provides the perfect hunting ground for their return to form.

One driver who will not be too pleased will be Nicolai Kjaergaard. While it was obvious the Carlin’s were sandbagging yesterday, the Dane clearly did not have the outright pace and will need a miracle to out-score Lundqvist this weekend. Completing the top eight behind Kjaergaard was Josuf Owega.

Granfors tops the table and the GB3 talking points after Silverstone

By Michael Callander
5 Mins read
The GB3 Championship saw three first-time winners at Silverstone last weekend, and a new name on top of the standings. We take a look at the key stories after the first quarter of the season.
GB3

By Michael Callander
2 Mins read
Max Esterson delivered his best results since moving up to GB3 with two fourth-place finishes in the first two races at Silverstone. The Checkered Flag caught up with the Red Bull-backed driver after Race 2.