Nasr and Curran Win to go Joint Top after Detroit

In a 100 minute race that went down to the final lap, former F1-driver Felipe Nasr took his first win of the season with Whelen Engineering Racing Cadillac DPi teammate Eric Curran to ensure the pair leave the Detroit Grand Prix equal top of the championship standings.

While Nasr had the lead in the closing laps, he found himself under pressure from the closing Ricky Taylor in the #7 Acura Team Penske Acura DPi. The Acura had fresher tyres and closed down the five second gap, but was unable to make a way past around the Belle Isle Street Circuit.

The Whelen Engineering Racing machine had started sixth on the grid, spending the early part of the race behind the leaders, though did jump a place when the polesitting #22 Tequila Patron ESM Nissan DPi was forced to pit with a gear selection problem. After changing Pipo Derani‘s wheel, a spin for co-driver Johannes van Overbeek cemented a disappointing race, crossing the line seventh.

Taylor had been leading, but lost the position when he came in for the final pitstop, with Nasr setting the fastest lap of the race to take the advantage, winning by just 1 second. Completing the podium would be the #6 Acura, who had started on the front row, before falling behind their teammate.

Fourth would be the #2 Tequila Patron ESM. After contact with the Acura’s in qualifying, it would be a spectacular recovery from the ESM team benefitting from their teammates misfortune.

They held off the #10 Wayne Taylor Racing Cadillac DPi-V.R while the #5 Mustang Sampling Racing Cadillac DPi appeared to run out of fuel on the final lap managing to crawl across the line in sixth. The result ensures that Filipe Albuquerque and Joao Barbosa are now equal on points with the race winners in the championship, salvaging a sub-par race for the Cadillac team.

With the #22 Tequila Patron in seventh the #52 AFS/PR1 Mathiasen Motorsports Ligier rounded out the top eight, becoming the highest placed LMP2 finisher. 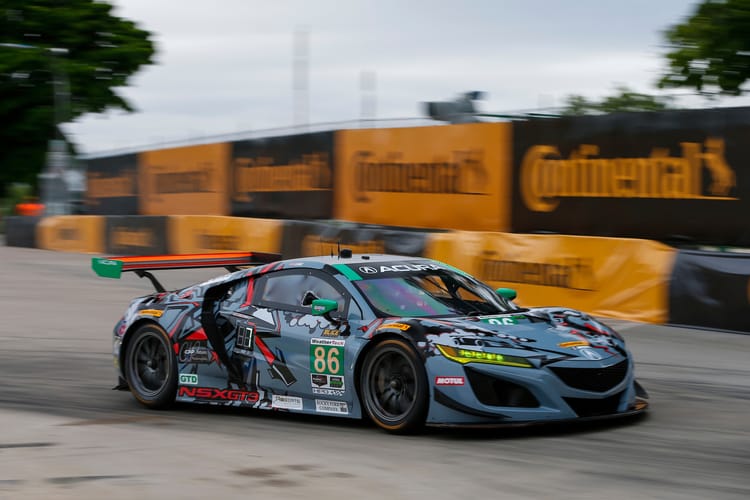 Meanwhile in GTD, it was a Meyer Shank Racing w/ Curb-Agajanian 1-2 with Mario Farnbacher and Katherine Legge taking the win their #86 machine by nine seconds.

The result moves Legge and the #86 closer to the overall lead of the championship as polesitter and point leader Bryan Sellers & Madison Snow fell to third by the end of the race. The #48 Paul Miller Racing Lamborghini had been leading in the early stages, but elected to change all four tyres during the pitstop procedure. With the Acura NSX GT3’s only changing the left tyres, they both leapfrogged ahead on track.

It would be a blow for the team who found themselves separated from any chance to challenge due the advancing Prototypes in the closing stages. Some nine seconds back would finish the #33 Team Riley Motorsports Mercedes-AMG GT3 who themselves held off a late charge from the #63 Scuderia Corsa Ferrari 488 GT3, crossing the line fifth.

This meant the top six would be rounded out the #14 3GT Racing Lexus RC F GT3 as David Heinemeier Hansson in the sister #15 3GT Racing brought out the days only caution after crashing in the sixteenth minute.