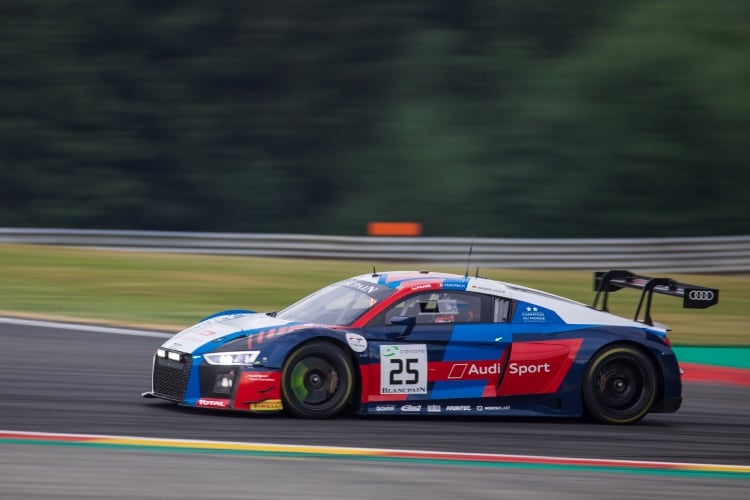 The #25 Audi Sport Team Saintéloc R8 LMS leads the 24 Hours of Spa with 6 hours remaining at the Belgian circuit, though the battle for overall victory remained highly competitive.

The Saintéloc machine assumed the lead shortly before the 18-hour mark when the leading #99 ROWE Racing BMW and second-placed #4 Mercedes-AMG Team Black Falcon took their latest pit stops and dropped to fifth and sixth respectively. The Audi had been running just behind this pair and could re-join the battle for the lead once it has made its next stop.

The #99 BMW drove to the head of the pack when the early-morning leaders took their mandatory technical pit stops. ROWE had already completed their mechanical pitstop and jumped to the front of the field as a result. The same was true of the #25 Sainteloc-Audi and the #4 Black Falcon Mercedes.

The race was then neutralised following a three-car incident involving the #117 KUS Team75 Bernhard Porsche, the #111 Aust Motorsport Audi and the #8 Bentley Team M-Sport car. The subsequent full-course yellow developed into a safety car period, cutting the #99 car’s lead from around 10 seconds to just two.

When the track went green, there was quickly a change of position for the second spot when the #4 Mercedes of Luca Stolz passed Frederic Vervisch in the #25 Audi. The latest pit stops shuffled the pack, but with six hours to run the lead battle looked set to be between representatives of BMW, Mercedes and Audi.

The Pro Am class remained a one-sided affair, with the #42 Strakka Racing Mercedes continuing to lead comfortably from the #333 Rinaldi Racing Ferrari. The Strakka car sat 14th overall at the three-quarters distance.

Silver Cup and Am Cup both remained stable from the early morning. The #12 Ombra Racing Lamborghini paced the Silver order, while the #77 Barwell Motorsport Lamborghini appeared equally comfortable in the Am contest. In Groupe National, the #67 GDL Racing Lamborghini held on to P1 despite a collision with the #62 R-Motorsport Aston Martin.

The final six hours of racing are likely to see significant battles among the overall contenders, with much more to be settled before the winner of this year’s Total 24 Hours of Spa is decided.