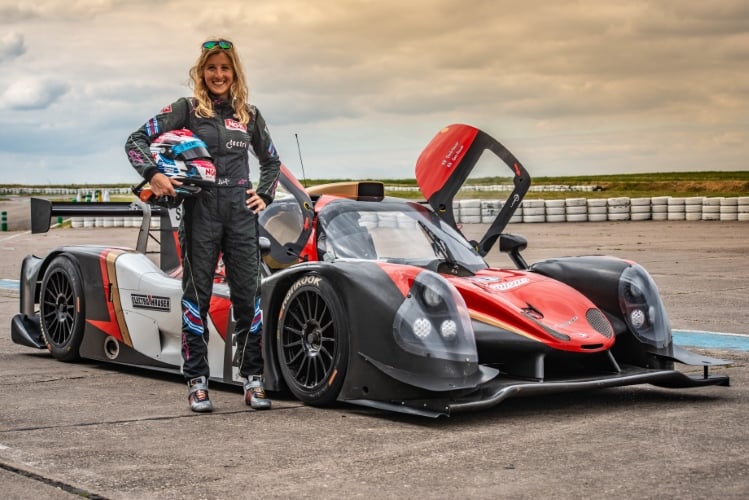 The Leicestershire driver was invited by the team drivers Gary and David Hauser to complete a full day of testing, in what was her first outing in a 420bhp V8-powered Ligier JSP3 LMP3 car.

No stranger to a high-downforce racing car, Charlie first made her name in motorsport by competing in European Hillclimb events, behind the wheel of her Norma M20 FC.

The test gave Charlie valuable experience of the car as she continues her journey towards a future career in endurance racing and an ultimate goal to be the first transgender racing driver to compete in the 24 Hours of Le Mans.

Charlie is already a podium winner at the Le Mans circuit, having finished third in her debut endurance outing at the Trophee Tourisme Endurance alongside Nicolas Shatz, and hopes to return to compete in the full 24 hours event in the future.

Charlie Martin said: “What an incredible feeling to have this opportunity in the Ligier JSP3. Despite this being my first time in a prototype car with this amount of power, I felt comfortable right away and was able to set some competitive lap times. The Chambley circuit is quite narrow, and I can imagine how good it would be to race a car like this at somewhere like Silverstone or Spa and really use the wide track.

“There is more weight and much more grip than I have had before but the paddle shift reminds me of my Norma hill-climb car, and it felt quite familiar. The limited visibility in a prototype like this is something to get used to, but it quickly became very intuitive and the lap times fell throughout the test. Huge thanks to Racing Experience for inviting me. I will have the biggest smile on my face for a long time now. All I want to do is get back in the car.”

Charlie now travels to Spa-Francorchamps for the next round of the Protyre GT5 Challenge on 21-22 July.