Fernando Alonso: “We weren’t in the points so we had to try something” 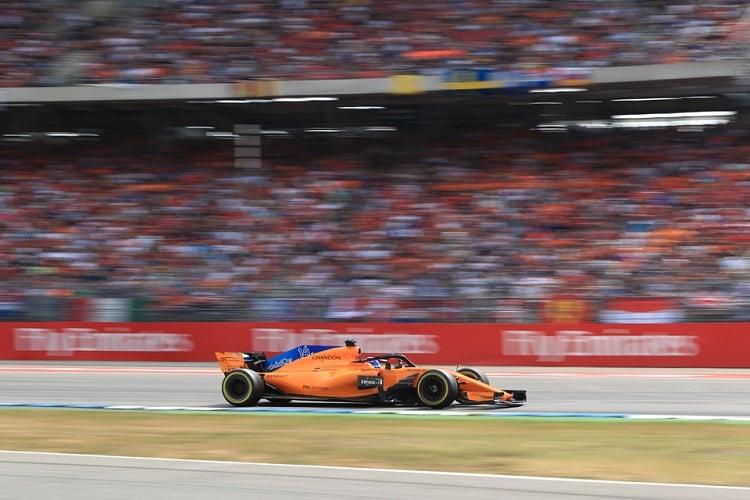 Fernando Alonso said he took the gamble to switch to the Intermediate Pirelli tyre when it first rained at the Hockenheimring as his team expected it would rain hard in the following laps, only for it to hold off and force him back into the pits for slicks.

The McLaren F1 Team racer had hoped the gamble would pay off so he could break into the points, but the lack of rain and additional pit stop to ditch the Intermediates left him lapped and at the back of the field, with even the safety car period, caused when Sebastian Vettel crashed out of his home race from the lead, unable to help him advance up the field.

“It was a tricky race today,” said Alonso.  “We bet on the rain and at the first drops we pitted for Intermediate tyres, expecting that it would rain hard in the following few minutes.

“But, it didn’t, and we were out there on a dry track with wet tyres, so we killed them and then we had to stop again to get back onto dry tyres.  At that point, our race was compromised.

“It was difficult conditions out there, but we weren’t in the points so we had to try something. Disappointingly, the bet today was the wrong one.”

In the end it was all for nothing as the team detected a possible problem with his gearbox, which meant that with two laps remaining, he pulled into the pits to retire, although he was still classified down in sixteenth.

“At the end of the race, the team told me to retire the car, as they probably saw something on the data,” said the Spaniard, who remains eighth in the Drivers’ Championship after the first eleven races of the season, twelve points behind seventh placed Nico Hülkenberg.

By Ashley Cline
1 Mins read
With the Spanish Grand Prix ahead, Aston Martin’s Sebastian Vettel and Lance Stroll look forward to seeing how the field has progressed since testing, as the 2022 cars return to Circuit de Barcelona-Catalunya.
Formula 1

By Nick Golding
2 Mins read
Toto Wolff is full of fire ahead of the Spanish Grand Prix and believes the best of the W13 is still yet to be seen.