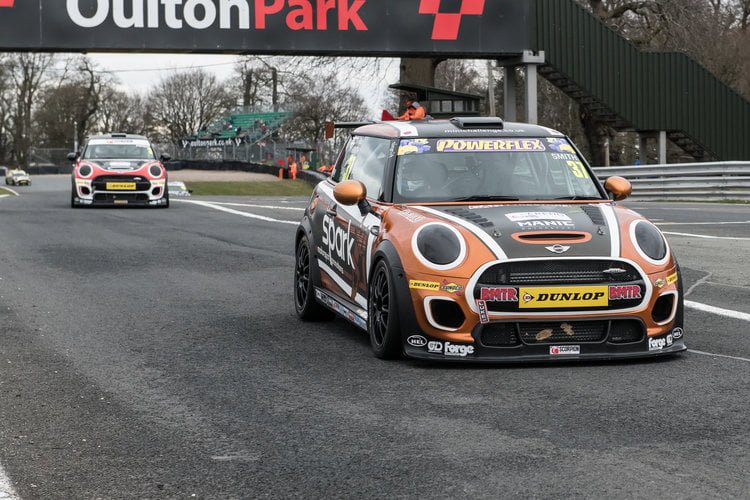 A composed drive from Rob Smith saw him win for only the second time this year as he led home a five car train in the opening MINI Challenge – JCW race from Oulton Park.

The event, which headlines the one day MINI Festival, had been slightly delayed after a stop-start qualifying session, with Smith keeping his cool in the Cheshire heat with Jordan Collard setting the fastest lap.

As the lights went out it was a typically clean start for front-row starters Smith and David Robinson. With the pair recording a win each this season, both knew the sweet taste of victory, dying for a chance to add to their trophy collection.

The biggest mover had been Ant Whorton-Eales, with the ex-BTCC racer scything his way past three drivers on the opening lap to take third from Rory Cuff. Sadly for the Team Dynamics racer, he failed to live up to his qualifying hype, dropping back a few places as he struggled to maintain his pace with the leaders.

With the clock counting down, five drivers emerged in the battle for the lead as Jordan Collard started to catch the back of fourth place Nathan Harrison, who himself was now struggling to make progress past Whorton-Eales.

Smith was wise to the pressure, holding off Robinson and company for his second win of the year, thus moving him into real championship contention. Robinson’s runner-up spot was only his second podium of the year, but will benefit from a poor race for Henry Neal and others, while Whorton-Eales recovered from his qualifying shambles to claim the final podium spot.

Harrison and Collard followed them closely, but both will know that a strong result will be needed in race two to recover the lost ground in the standings.

Further back, Jack Davidson would finish a distant sixth, but a ten second penalty dropped him to fifteenth. This meant that sixth overall went to Paul O’Neill, with Cuff and Lewis Brown rounding out the top eight. The final JCW race will start 14:40 local time.