Timmy Hansen – “We will become faster and faster!”

Timmy Hansen has been on the cusp of taking a win in the 2018 FIA World Rallycross Championship before the end of the first half of the season. Once again he was in this position for his home World RX event.

The Team Peugeot Total driver was eager to see how the upgraded Peugeot would go on home turf and he made the best use of the new car from the off. Setting times in the first two Qualifying sessions that ended up netting him third pace overall on Saturday meant that Hansen was in a good place to charge forward for Sundays action.

Hansen praised the hard work of his team for getting the new car into such a position that he could challenge early on for the win.

Timmy Hansen had the speed to challenge for the overall win on home ground.Credit: Jaanus Ree/Red Bull Content Pool

“The guys in the team – engineers, mechanics, and me too – did a great job to adapt to all the changes with the updated PEUGEOT 208 WRX. We had an epic weekend. I was in second position on the last lap during the final,” explained Hansen.

After Qualifying finished on Sunday, Hansen retained his third place which gave him a front row start for the Semi-Final and the Swedish driver used it to good effect. After finishing second, he lined up for the Final and ready to push for the win.

However, history would have a part to play in Hansen’s demise after he started the last lap of the Supercar Final in second place. 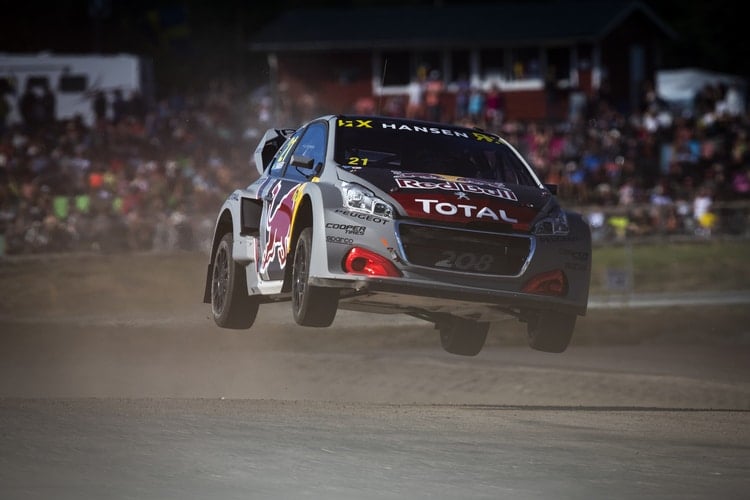 Hansen is looking to Canada for his next chance of victory. Credit: Jaanus Ree/Red Bull Content Pool

“First of all, Andreas Bakkerud pushed me off line and passed me. And then Mattias Ekström completely pushed me off the track – and I actually dislocated my shoulder in the impact. So I am in a bit of pain. Both in the shoulder and, you know – inside. We still have a lot of potential to discover in all of these updates.”

“So it’s easy to be motivated for what comes next. We will become faster and faster throughout the year. At the next race in Canada we can hopefully fight for the win.”