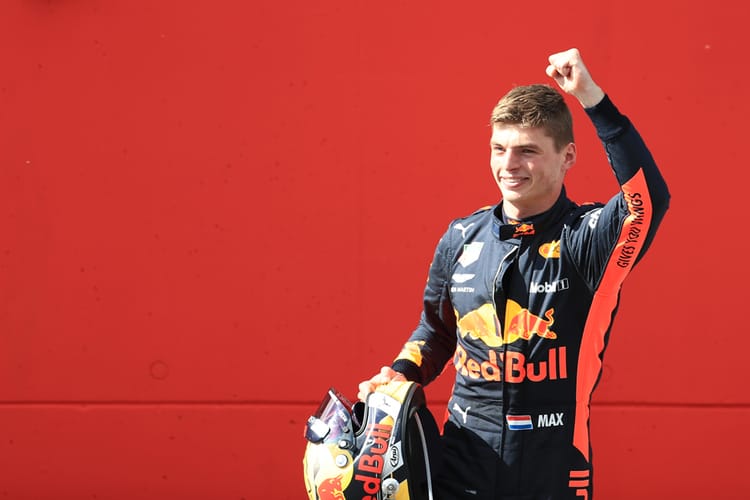 Max Verstappen has expressed his delight with his “unexpected” victory in the 2018 Austrian Grand Prix.

Verstappen had started the race from fourth for Aston Martin Red Bull Racing but bullied his way passed Kimi Räikkönen on the opening lap and benefitted from a pit-stop under virtual safety car conditions to take the lead.

Despite pressure from the pursing Scuderia Ferrari and question marks surrounding tyre longevity, Verstappen absorbed the pressure to take victory in front of thousands of travelling Dutch supporters.

“I’m so happy to win at the Red Bull Ring, and with so many Dutch fans here,” says Verstappen. “It was also so unexpected, and that makes it even better. An amazing weekend.

“If you want to win a race this is the perfect place, in a Red Bull car at the Red Bull Ring.

“For the race I was very happy in general with how the car was behaving but I always just try to do my best race possible; if that is going to be first, second, third, it’s not in your hand. From my side I felt in control, I was driving to the best I could with the car I had and at the end we were struggling a little more than Ferrari with the tyre blistering but we managed to stay ahead.”

Verstappen took the lead of the race when Lewis Hamilton made a pit-stop on lap twenty-five, having missed the opportunity to pit under the VSC. Both he and Verstappen’s team-mate Daniel Ricciardo suffered with badly blistered tyres and were forced to make additional stops.

Verstappen admits that he wasn’t driving “to the full limit”, opting instead to manage the tyres.

“I knew that Daniel and Lewis had to pit again and I didn’t want that scenario so I was not driving to the full limit of the car but just managing everything.

“It was tougher than perhaps it looked but I just needed to be on top of my tyres. I’m very thankful to the engineers for making that strategy call under the VSC and full complements to the team for that pitstop, because that definitely made our race.”

Verstappen’s victory at Red Bull’s home race was made all the more special by the presence of a legion of Dutch fans.

“The fans in the grandstand were great, so many orange t-shirts there. My focus was always on the track but for the last few laps I could look a little bit to my left and they were really cheering me on, it was amazing.”