It what had been a dominant display at the 6 Hours of Silverstone, once again the dreaded skid blocks played their hand in shuffling up the end result of the race. Not one, but both Toyota Gazoo Racing LMP1 cars were disqualified from the race for having too much of their skid block rubbed away, breaking the Japanese team’s clean sweep of victories in the 2018/19 FIA World Endurance Championship. However, racing was slightly statemented in the LMP classes, with both disciplines having a dominant team that ran away with the race. The most intense fights were seen in the GTE fields, more so in the Am class.

Fernando Alonso had been holding a 100% success record in his WEC races, but the disqualification has seen that dismantled. Although it does not look to have much effect in the final championship standings, it has at least brought the Rebellion Racing team into the equation for the moment, with neither Toyota scoring any points on the weekend. There has been no statement at the time of publishing from any of the Toyota drivers after being excluded from the race.

Toyota had been the dominant car all weekend, not failing to top any of the timing sheets before the race. On track, the race was perfect for them and it took them only 54 minutes to put a lap on the grid, ending four laps up at the end of the race. All of the privateer teams are under no delusion that they can’t deny the Toyotas victory, suggesting that the WEC’s attempt at bringing the privateers and hybrids into the same competitive window (with EoT) is not working. The WEC need to seriously re-evaluate the LMP1 situation, as the interest in the class is quickly slipping. They need to make sure the class is strong enough to survive without the Alonso-hype, which doesn’t seem to be the case at the moment.

SMP Racing must take the next two months before the 6 Hours of Fuji to refine their reliability issues. The Russian team were the strongest privateer this weekend, yet ended up fifth of the track, only scoring a podium due to the expulsion of the Toyotas. Jenson Button’s #11 didn’t make it through the first hour, with Mikhail Aleshin having to stop at Maggotts with a suspected engine issue. The team should have been set for a solid 3-4 (which would have turned into an inherited 1-2 post race) but the reliability of their cars isn’t strong enough yet.

Repeating the performance they had last year, the Jackie Chan DC Racing team shone around the ex-British airfield. It was a dream 1-2 for the team, putting the #38 ahead of championship rivals Signatech Alpine who came home for a distance third (two lap off the leaders).

The ORECA-running cars were the favourites all weekend, as they have proved during the first few races of the season. It had been looking to go that way during the 6 Hours of Silverstone, but an amazing start from Giedo van de Garde in the #29 Team Nederland Racing put them hot in the hunt for the win. Sadly, the Ligier dropped down the field, managing to finish no better than fifth in class.

The Toyotas were not the only cars to get disqualified from the final result, as the #91 Porsche GT Team joined the Japanese cars in expulsion. The Porsche was disqualified for incorrect ride height in post-race scrutineering. They lost their second place in class due to the infringement.

GTE Pro delivered one of the best races of the six hours. At some point over the six hours, each manufacturer had a commanding and dominant pace, meaning that there was always a race to watch for class lead and, failing that, a race for position on track. The Ford Chip Ganassi Team UK cars were the favourites before the green flag, and definitely showed the most consistent pace throughout the race, always found in the top four positions. Sadly for Ford, the #66 suffered a door issue, which was one of the factors that stopped them claiming a strong 1-2. James Calado and Alessandro Pier Guidi capitalised on the Ford’s misfortune to score Ferrari’s first WEC victory since the 2017 6 Hours of Bahrain.

The BoP for this class looks to be, slowly but surely, moving in the right direction. It does still need some improvement, as Ford still have a dominance over the class in a clean race, but it is good to see that the like of Aston Martin are back as a predominant player in the field. 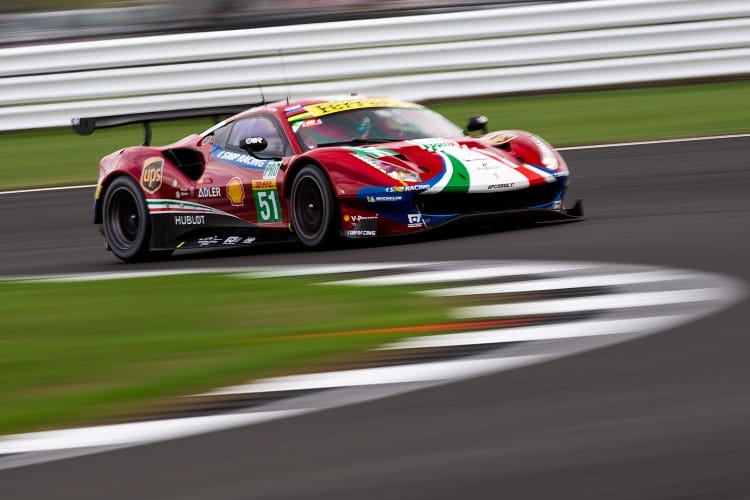 The Am class was a great 5h10m battle between TF Sport and Team Project 1. The two cars circulated with each other, never dropping too far behind each other (the most they dropped back was to race in some clean air). Although it had been an epically fought battle, one that Jonny Adam looked set to round of with the Aston Martin-customer team’s maiden WEC victory, but it was decided in the end on penalties. The 24 Hours of Le Mans Am class winners #77 Dempsey-Proton Racing inherited the win after both the #56 and #90 were hit with 75-second penalties for Safety Car pit stop protocol.

Albeit a two-horse race in the end, the Am class also showed very similar pace across the field, which led to close fought battles up and down the order. Some teams may not have been fighting for the top three positions, but they still continued to put on a great show for the British crowd. The Ferrari-running teams seemed to be on the back foot compared to the other manufacturers, with Aston Martin’s BoP improvements turning it into a Porsche-Aston Martin battle rather than the Porsche-Ferrari races we saw in the first two rounds of the championship. Still, most of the cars in class finished on the same lap, showing the close-pace the cars have.

Silverstone will host the opening round of the 2019/20 WEC season, and has thus far this season brought arguably the most exciting race. This should set it in good stead if the competitive nature of the full grid continues to move in the direction it showcased last weekend. The main thing the WEC need to sort is the dominance at the front, and from the looks of things this might not be possible.