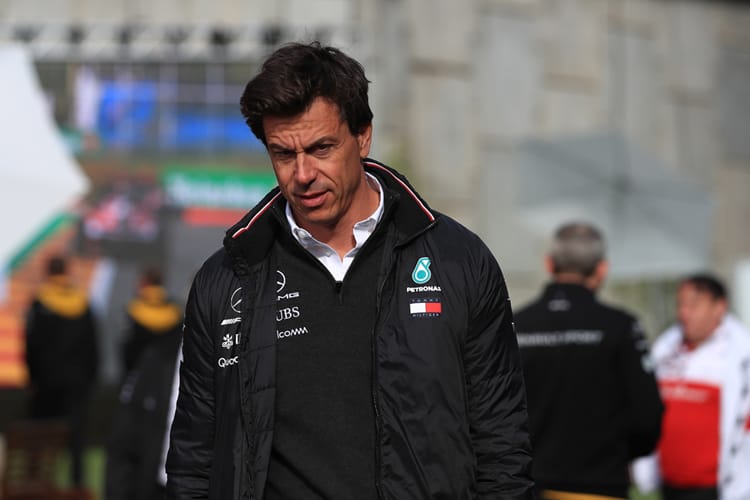 Ferrari had looked imperious in dry conditions through the first three free practice sessions, and looked set to back it up with a pole position in qualifying – particularly with Ferrari drivers Kimi Räikkönen and Sebastian Vettel logging the fastest times in the first and second qualifying sessions respectively. The third session was completely different though, as rain started to fall just as it got underway – throwing a lifeline to Mercedes and rain-master Lewis Hamilton. He was able to take pole by almost a second, setting up a Mercedes-Ferrari front row.

The race, however, wasn’t as exciting. As many expected, Vettel was able to use his higher speed and the slipstream to overtake Hamilton at the end of the Kemmel straight. A first-lap safety car gave Hamilton the opportunity to catch up to Vettel but, at the restart, the German was able to easily pull away – taking the chance of a Mercedes away with him.

This lack of Mercedes battle made the race a “deflating” one for Wolff, who said that not even strategy could salvage a win.

“Today was a little bit deflating after the drama of qualifying.

“Lewis was pretty powerless on lap one – he got swallowed up by Vettel on the straight, but then couldn’t return the favour when Sebastian managed to break the tow on the restart after the Safety Car period. From then on, we were chasing a quicker car and didn’t quite have enough pace to challenge for the lead.

“On the strategy, we did the only thing we could – which was to try the undercut – and try to put some pressure on Ferrari, but they didn’t buckle. They were deserved winners today.”

Hamilton’s team-mate Valtteri Bottas was forced to start from the back of the field having picked up a thirty-place grid penalty for exceeding his power unit supply. From there he was able to use the chaos of the start and his vastly faster car to work his way up to fourth place, setting the fastest lap in the process. This helped the team lose fewer points in the Constructors’ battle against Ferrari than they could have done but, Wolff says, the team can’t get complacent.

“Valtteri put in a great drive from the back to claim P4, so the points total brings us a small advantage on the constructors’ side, while Lewis lost some ground in the drivers’ standings. But most of all, we need to stay humble and keep working hard to improve our performance at every race.“