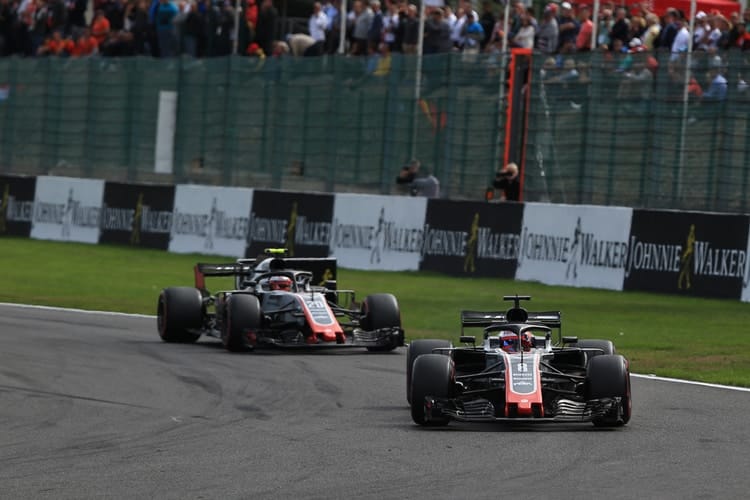 Haas F1 Team‘s Romain Grosjean has said he was ‘happy’ with his performance at the Belgian Grand Prix.

The Frenchman had a solid weekend overall, starting fifth on the grid.  He lost a place at the start to Aston Martin Red Bull Racing’s Max Verstappen and later to Mercedes AMG Petronas Motorsport’s Valtteri Bottas, but finished the race in seventh, just ahead of team-mate Kevin Magnussen.

“That was about what we expected today,” said Grosjean, who knew before hand that Red Bull and Mercedes were going to be too strong for the team in Belgium as they came fighting through the pack.

He felt as though the team’s performance was on par with new entity Racing Point Force India F1 Team, although both Sergio Pérez and Esteban Ocon finished ahead of both Haas drivers in fifth and sixth.

“We knew that the Force Indias had the same pace, if not a bit quicker, so it was difficult to stay with them,” said the Frenchman.  “They were quick in a straight line.

“I’m pretty happy with how the race went, and I’m happy Kevin was there as well.”

Grosjean said that the team’s performance put them in a good place in the Constructors’ Championship.  The team are on target to meet their target for the season, which is to try and beat the Renault Sport Formula One Team, with only six points between them after thirteen rounds of the season.

“Two cars in the points – in seventh and eighth – that’s really good for the constructors’ championship,” he said.   “It was a lot of points for us and zero for some others, so that’s a positive from this race.”

The next race of the season is due to held in Italy at Monza next weekend, so the the team will be planning to continue this performance for the remaining eight races of the season.