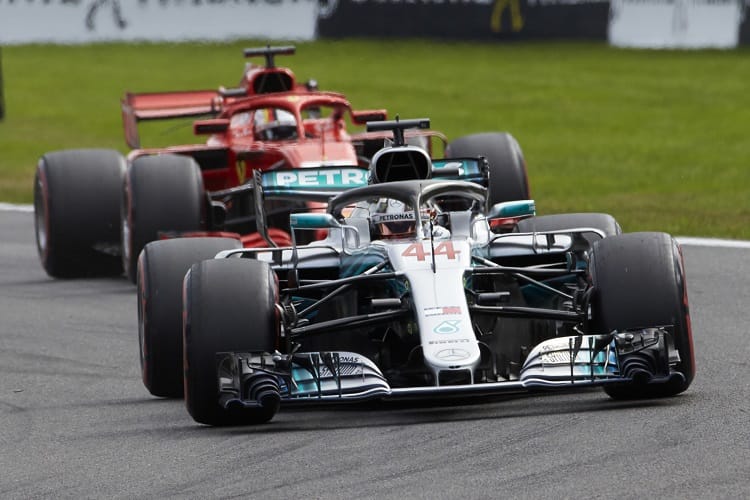 Both Mercedes AMG Petronas Motorsport and Scuderia Ferrari brought updated power units to the Belgian Grand Prix, but according to championship leader Lewis Hamilton, it was the Italian outfit that made the biggest step forward last weekend.

Ferrari were quickest in all three free practice sessions at Spa-Francorchamps and again in the first two segments of Qualifying when the track was dry.  It was only when the rain came in Q3 that Hamilton was able to deny Sebastian Vettel the pole position, but come race day it was all Ferrari again, with the German passing Hamilton on the opening lap and going on to take an easy-looking victory.

Hamilton says it is up to Mercedes now to get more out of their package as at the present time it appears Ferrari has the jump on them.

“We came here with a pretty good upgrade,” Hamilton is quoted as saying by Motorsport.com. “Generally every time we bring an upgrade they bring a bigger one.

“We’ve known for the last four races or so that they’ve had some things on their car that’s made them quicker on the straights. We’ve just got to work harder, I guess.”

Vettel feels that the set-up that Ferrari adopted at Spa-Francorchamps could have had a bearing in how fast they were in the first and third sectors, but compared to previous years in the hybrid era, they are definitely much closer to Mercedes than ever, and hopefully, for the German at least, slightly ahead.

“I hope we have more power. If that’s the case, then well done to our engine guys,” commented Vettel. “We’ve been making progress especially for the last two years so that’s good news.

“We ran a little bit less wing so were faster in sector one and sector three. Sector two a little bit slower.

“I wouldn’t disagree that this year in terms of power we’re a lot closer. Last year we didn’t have a chance here. It’s good to see we’re making progress.”