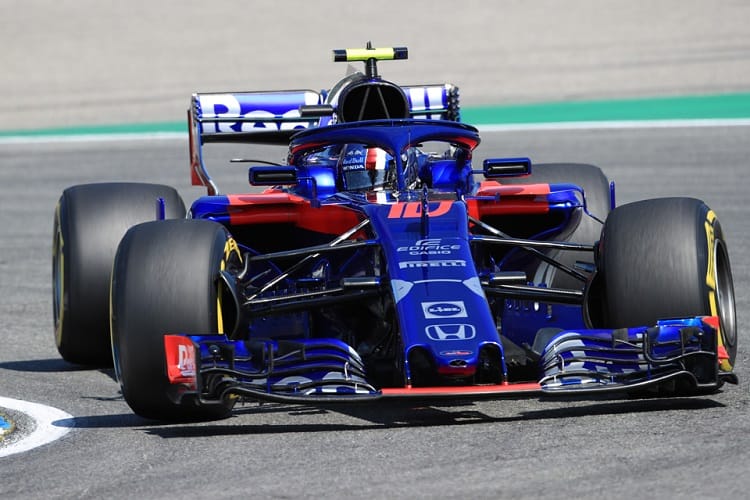 Red Bull Toro Rosso Honda currently sit eighth in the Constructors’ Championship after the opening twelve races of the season, with Pierre Gasly and Brendon Hartley between them scoring twenty-eight points in that time, although the majority of those have come from the Frenchman.

Following the McLaren F1 Team’s decision to split from Honda, eyebrows were raised when Toro Rosso opted to switch to Honda power for 2018, but twelve races in, it appears to have been justified, particularly as the sister outfit, Aston Martin Red Bull Racing, will join the Honda family in 2019.

Effectively this year was always going to be one of learning as the Faenza-based outfit came to grips with their Japanese engine manufacturers, and the results, and in particularly the performances, could indicate that this is indeed the case.

The form of Toro Rosso since their switch from Renault to Honda-power this season has been extremely up and down and track dependent, with the STR13 almost as likely to be the fourth best car on the grid as it would be the eighth or ninth best.

This can be highlighted by the high points of the season, such as Gasly’s amazing run to fourth in the Bahrain Grand Prix and sixth last time out at the Hungaroring, and by the low points, such as finishing eighteenth and twentieth in China, although this can also be attributed to a clash between the drivers at the hairpin that caused the race-defining safety car period.

Looking at the drivers however, it is clear that one driver has the edge on the other, with Gasly having out-scored Hartley by twenty-six points to two, with the Frenchman adding a seventh-place finish in Monaco to his results in Bahrain and Hungary.

It is no wonder that the Frenchman is thought of so highly within the Red Bull family, and his name is now high on the list to replace the departing Daniel Ricciardo at the sister team following the Australian’s shock announcement that he would be leaving to join Renault Sport Formula One Team in 2019.

Hartley on the other hand has been under pressure to keep his drive and only has two tenth place finishes to show for his efforts, with the Azerbaijan and German Grand Prix offering him his only two points of the campaign.  He has often struggled compared to his team-mate, although he has also been on the receiving end of some rotten luck along the way.

For example, his Silverstone weekend was ruined by a suspension failure in free practice that left him unable to qualify, with the team then detecting a technical fault ahead of the race that left him stuck in the pit lane as the lights went out, while his Canadian race was over on the first lap after contact with Lance Stroll.

He can have strong weekends, such as in Hungary when he made it through to Q3 for the first time and drove a mistake-free race, although he was left outside the points after the strategy of others, such as Fernando Alonso, enabled them to jump ahead of the Kiwi and into the top ten.

Off-track, Toro Rosso have appeared to have lost the services of technical director James Key, who has been poached by McLaren, although this is still up in the air as Franz Tost and Helmut Marko insist he is still under contract with them. There is still plenty to play out there, and it could end up with a McLaren junior racing for them next season as compensation, most likely Lando Norris.

That is for next year, however looking ahead to the rest of 2018 however, Toro Rosso need two strong drivers if they want to rise above the eighth place they currently hold, meaning Hartley will need to find a way to maximise his opportunities the way Gasly has predominantly been able to, which may also have the effect of extending is Formula 1 career beyond 2018.

As for Gasly, his future may have already been decided.

Gasly, the 2016 GP2 Series champion, made his debut for Toro Rosso at the back end of 2017 as the outfit saw the departure to Renault of Carlos Sainz Jr. and the removal completely of Daniil Kvyat from the Red Bull programme, but failed to score a point in his five appearances, but the backing he has received from Red Bull over the years has seen him wait for his chance, and now he has grabbed it with both hands.

The Frenchman’s performance in Bahrain was brilliant, giving Honda their best result yet since returning to the sport, the fourth place exceeding the fifth place finishes that Alonso managed when the Japanese marquee were aligned with McLaren.

Yes there has been some blips along the way, such as his clash with his team-mate in China and the first lap retirements in both Spain and France, but in between there have been some good drives, with his strategy enabling him to jump into the points in Monaco, while his performance in Hungary, both in the wet qualifying and the drive on Sunday where he was unlapped in sixth, was superb.

The Red Bull drive may be his next season if rumours are right, although he has to contend with competition from Sainz, who is only on loan to Renault this season, but another year with Toro Rosso next year would not be that bad for a driver with a reputation that is only being enhanced in 2018.

Whereas Gasly’s reputation is growing, Hartley’s has taken a big hit in 2018, although circumstances have often been against the New Zealander as he fights for his future within the sport.

Hartley came into Formula 1, much like his team-mate, at the back end of 2017, with the twenty-eight-year-old having switched back to single-seaters after a successful career in sportscar racing, which saw him win the FIA World Endurance Championship twice and take an outright victory in the 24 Hours of Le Mans.

However, it has been a much more difficult season that many, including possibly even himself, was expecting it to be for him, with eight eliminations in Q1, although two of those – Spain and Great Britain – were because he missed the session completely because of practice crashes.

He has also been on the receiving end of some Honda unreliability, particularly in the French Grand Prix weekend where he served a grid penalty after stopping on track during practice with an engine problem.  He has used six internal combustion engines this year so far, double the amount allowed for a season, which has left him taking grid penalties at least three races so far.

However, despite this he has been outpaced more often than not by Gasly, which is why Hartley often finds himself under pressure to perform, although his most recent races have seen him be a more confident driver, which can only bode well for him across the remaining races.  It is on his shoulders to impress, or he might find his shot at Formula 1 end after just one full campaign.

Brendon Hartley is under pressure to improve his performances across the remainder of 2018 – Credit: Octane Photographic Ltd

By Paul Hensby
3 Mins read
Williams’ Dave Robson is expecting a busy weekend at Portimão this weekend as the team looks to make up for the lost track time from the Nürburgring two weeks ago.
FeaturesFIA World Rallycross

By Nigel Chiu
4 Mins read
Nigel Chiu takes a look at all of the key talking points from a dramatic World RX of Barcelona,.