Don Panoz was known for his charisma and questioning the norm, pushing him to become one of the most successful entrepreneurs that motorsport and many other industries have ever known. Rarely was he seen without his trademark cigarette in his mouth in a cool but sophisticated way. It comes with a hint of irony to remember that he was involved in the invention of the dermatological patch, the technology behind the nicotine patch. But that in itself sums Panoz up perfectly; always striving for the new and ingenious.

In the motorsport world, he was best known for his work in saving sportscar racing in North America and bringing about the birth of the American Le Mans Seris and helping to instate IMSA to what it is known as today. In the later years of his life, he did a lot of work with his company  Green4U Technologies, focusing heavily on electric cars and electric racing cars. At the 2017 24 Hours of Le Mans, Panoz revealed his vision for the future of LMP1 racing in an all-electric powered sports car.

Panoz vehicles have always been eye-catching, a talking point and revolutionary. From the Panoz LMP cars all the way through to the renowned DeltaWing, Panoz vehicles have taken many wins at prestigious events like the 24 Hours of Le Mans, IMSA’s 12 Hours of Sebring and the Petit Le Mans, a race that Panoz himself was heavily involved in making a reality. His cars are still racing on the track now, with the Panoz Avezzano recenly taking the 2018 Pirelli World Challenge’s GTS Sprint/Sprint-X Manufacturer’s Championship. This latest championship victory allowed Panoz to see the fruit of his hard work, taking the battle to the ‘big boys’, win one last time.

In the 1990s, Panoz fell in love with racing, catching the Le Mans bug hard after experiencing the blue-ribboned event for the first time. In an attempt to bring the spirit of Le Mans to America, Panoz moved to create the American Le Mans Series, starting with the well-known Petit Le Mans. This race debuted as a ‘one-off’ in October, 1998, as a ten-hour (or 1,000 mile) endurance event at Road Atlanta. Following the race’s large success at the inaugural event, it became an annual race and was the root for the birth of the American Le Mans Series.

“Don Panoz will be remembered as a one of the most important figures in the history of sports car racing,” Jim France, NASCAR chairman and CEO and IMSA chairman, said to Motorsport.com. “Don was a true gentleman who deeply cared about our sport.

“That was obvious to all who are involved with sports car racing. He became a great friend and partner, and we shared the pride of combining Grand-Am and the American Le Mans Series and re-establishing the IMSA brand, bringing sports car racing together again. Don was a true innovator whose work touched many lives.” 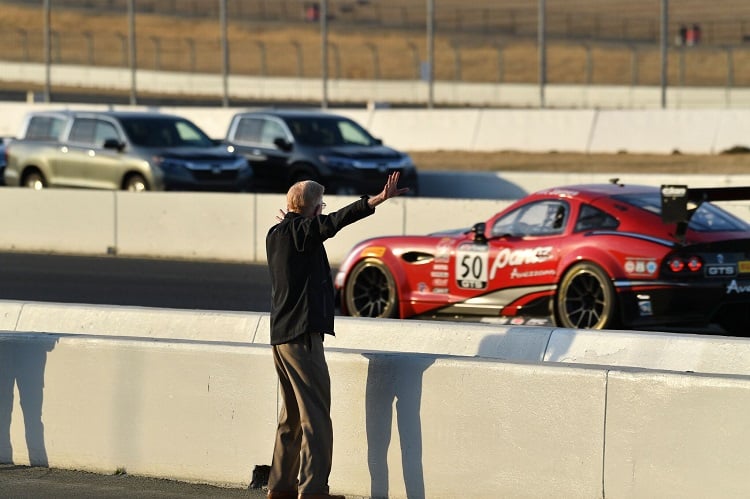 “It is difficult to find the right words to express my sadness with the news of Don’s passing,” said Scott Atherton, who became president of the new IMSA and worked closely with Panoz before his passing. “He was a very special guy – the most visionary and creative person I have ever worked with.

“He was a serial entrepreneur of the highest order. Don was the consummate ‘idea guy’ – not all of them good, mind you – but he came up with several that were truly brilliant that transformed entire industries.

“Many of us who make our living in motorsport owe him a debt of gratitude. He deserves full credit for putting professional sports car racing back on the map when it was at its lowest point.

“His acquisition of IMSA, Sebring International Raceway, Road Atlanta, Mosport and the creation of the American Le Mans Series are enduring monuments of his legacy.”

I was lucky enough to sit down with Panoz at the 2017 24 Hours of Le Mans to talk to him about the new Green4U technology and his ideas about the future of sports car racing after the announcement launch of his GT-EV. In a cigarette-fume filled room, with the blare of sports cars blasting past his private room and filling the small space with an echo of the great noise, he was calm, content, and happy. Racing was clearly where he felt happiest, and this was clear in our brief meeting.

At the age of 82, as he was at the time, his passion for racing and developing new and environmentally-healthy technology was still very clear. He happily and excitedly showed me through a short presentation of the quirky yet heavily effective and useful vehicles that Green4U and Panoz Technologies had already created, always with a cigarette not too far away.

Panoz was not only a highly celebrated entrepreneur and very successful sports car enthusiast, but he was also a family man, loving husband, a comedian, philanthropist, innovator, and a visionary. He was an inspiring and entertaining man to be around and work for / with, and will be sorely missed by many.

Panoz lost his battle with pancreatic cancer in the early hours of Tuesday (11th September) morning, and passed away peacefully, surrounded by his loving family and enjoying one final cigarette.

By Steven Batey
5 Mins read
The 2021 FIA World Rally Championship gets underway this weekend in Monte Carlo and Steven Batey looks at the contenders for the opening win of the season.
24 Hours of Le MansIMSA