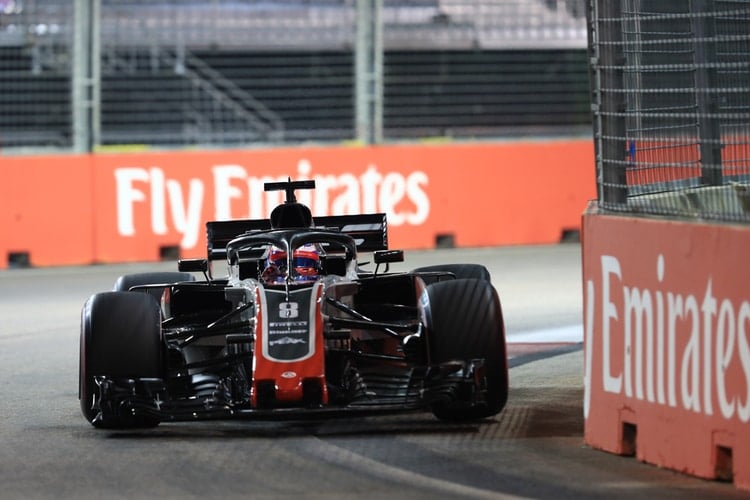 Romain Grosjean felt he had a great performance after qualifying eighth for the Singapore Grand Prix.

The Haas F1 Team driver had a great save through turn 21 to avoid the wall and admitted that mistake cost him a shout at rivalling the Racing Point Force India F1 Team of Sergio Pérez.

“I think I had a great performance,” said Grosjean.  “On my last lap I had a massive oversteer into turn 21.  I guess I lost about three tenths of a second, so it could’ve been really tight with (Sergio) Perez.

“You know, Force India, they were really quick in Monaco, and here it’s the same kind of track, so I’m a little surprised.”

Grosjean’s Haas team-mate Kevin Magnussen was knocked out in Q1 and the Frenchman was sympathetic.

“It’s a shame Kevin couldn’t make it through,” he said.  “I think he missed a tenth or so, and on a track like this, it’s always difficult to find the limit in Q1.

Grosjean believes the race at the Marina Bay Street Circuit could be “interesting” due to the situation with the tyres but he hopes to finish in the points.

“The race is going to be super long,” said the Frenchman.  “The hypersofts are doing about three laps and then you better be on softs.

“It’ll be interesting tomorrow.  It’s going to be hot, there’s probably going to be a safety car and, hopefully, we get a good race pace and keep the fight going.”