Lewis Hamilton edged further away from Sebastian Vettel in the Drivers’ Championship after claiming victory in the Italian Grand Prix on Sunday afternoon at the Autodromo Nazionale Monza.

The Mercedes AMG Petronas Motorsport driver overcame long-time leader Kimi Räikkönen with just eight laps remaining to clinch his sixth victory of the season and his fifth win at Monza in his Formula 1 career.  It also extended Räikkönen’s run without a win in Formula 1 to 108 races, with his last triumph coming in the 2013 Australian Grand Prix whilst racing with the Lotus F1 Team.

The afternoon started to go towards Hamilton and the Mercedes team on the very first lap when he attacked Vettel heading into the Variante della Roggia as both followed polesitter Räikkönen.

A bit of understeer from Vettel saw the Scuderia Ferrari driver hit the side of Hamilton’s car, which in turn spun the German around and to the back of the field, just as the safety car was deployed when Brendon Hartley was left stranded at the side of the track with a broken car after contact with Marcus Ericsson on the run down to the first corner.

The incident between Hamilton and Vettel was looked into by the stewards, but it was deemed to be a racing incident with no action being taken against either driver.

Vettel pitted at the end of the lap to replace his front wing, while there was also superficial damage to his bodywork thanks to the contact, but the German drove through the field superbly, and ultimately was able to finish fifth on the road, despite making a second pit stop for tyres on lap thirty.

Kimi Räikkönen led for much of the afternoon but dropped behind Lewis Hamilton when it mattered – Credit: Octane Photographic Ltd

Hamilton had shadowed Hamilton for much of the afternoon, with reigning World Champion also helped by team-mate Valtteri Bottas, who delayed his own pit stop to slightly hinder the Ferrari driver, who was struggling with his rear tyres as well.  Räikkönen held his own for a good spell, but after a few laps of looking after his own tyres, Hamilton fought for the lead and took over at the front on lap forty-five.

Räikkönen dropped back in the closing laps, with Hamilton eventually closing out the win by 8.705 seconds, while the final step on the podium was occupied by Bottas, despite the second Finn finishing fourth on the road behind Aston Martin Red Bull Racing’s Max Verstappen.

Verstappen was deemed to have caused a collision with Bottas as the two battled into the Variante del Rettifilo on lap forty-three, with the two banging wheels as the Dutchman edged back across the track as they ran side-by-side.  Bottas was pitched into a half spin and forced through the run-off while Verstappen escaped, but it was not long before the two were nose-to-tail again, such was the pace advantage of the Mercedes driver.

Vettel also had the pace to close on the pair ahead of him, and the German also finished under five seconds behind Verstappen to ensure he gained fourth in the final result and a potentially important two points in the championship battle.

Romain Grosjean was the best of the rest of the field in sixth for the Haas F1 Team, with the Frenchman defending in the final laps from the Racing Point Force India F1 Team duo of Esteban Ocon and Sergio Pérez, with the latter likely to be particularly pleased with his performance after being eliminated in Q1 on Saturday.

Both Force India drivers were able to get ahead of Carlos Sainz Jr. thanks to making significantly later pit stops than the Renault Sport Formula One Team racer, who was ultimately forced to settle for ninth at the chequered flag, while the final point went the way of Lance Stroll, who secured Williams Martini Racing’s second top ten finish of the season in tenth. 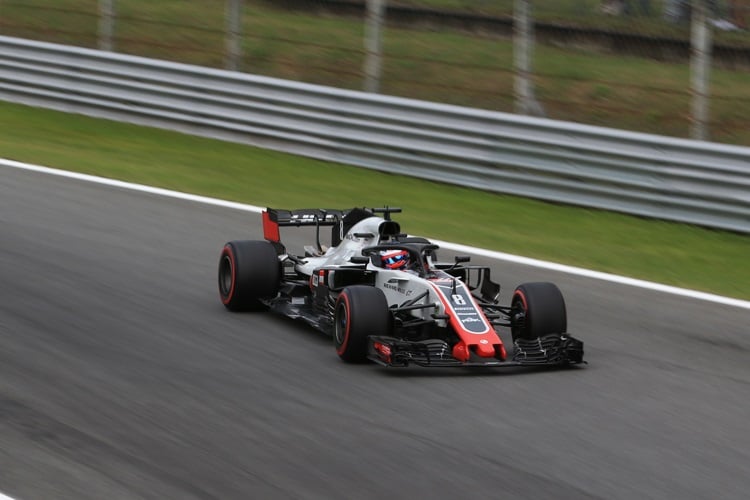 Stroll and team-mate Sergey Sirotkin had run inside the top ten early on, but whereas the Canadian was able to remain there until the chequered flag, the Russian just missed out on a top ten finish in eleventh and is still seeking his first points of his Formula 1 career heading into the final seven races of his rookie campaign.

Charles Leclerc finished twelfth in a relatively quiet afternoon for the Alfa Romeo Sauber F1 Team driver, with Stoffel Vandoorne thirteenth for the McLaren F1 Team ahead of Nico Hülkenberg in the second Renault after the German’s gamble on making a pit stop under the first lap safety car not paying off when he struggled for performance and dropped out of the points.  He took a second trip to the pits not long after, but the damage had already been done and he was unable to progress better than fourteenth.

Pierre Gasly could not replicate his pace from Qualifying, where he qualified an excellent ninth, and was unable to better fifteenth on Sunday for Red Bull Toro Rosso Honda, who lost team-mate Hartley on the opening lap.

The Frenchman finished ahead of the second Sauber of Ericsson, who was forced to pit on the opening lap after that contact with Hartley, while Kevin Magnussen brought up the rear of the field after being forced into an unscheduled first stop after contact with Pérez at the second chicane just after the safety car restart.

As well as Hartley, there were also retirements for Fernando Alonso, who crawled to the pit lane in the second McLaren on lap ten having run inside the points in the opening laps, while Daniel Ricciardo seemed to suffer more engine woes in the second Red Bull, with the Australian having made good early gains from the back of the grid following his grid penalty.

Monza is likely to be remembered for another swing in the championship, just seven days after Vettel had slimmed the gap down to seventeen points, it is now out to thirty, meaning that whatever happens in the Singapore Grand Prix in two weeks time, Hamilton will still lead the championship.

However, you can be certain that both Mercedes and Ferrari will be giving it their all between now and the end of the season to ensure they come out on top of what is becoming an ever-increasingly interesting championship battle.