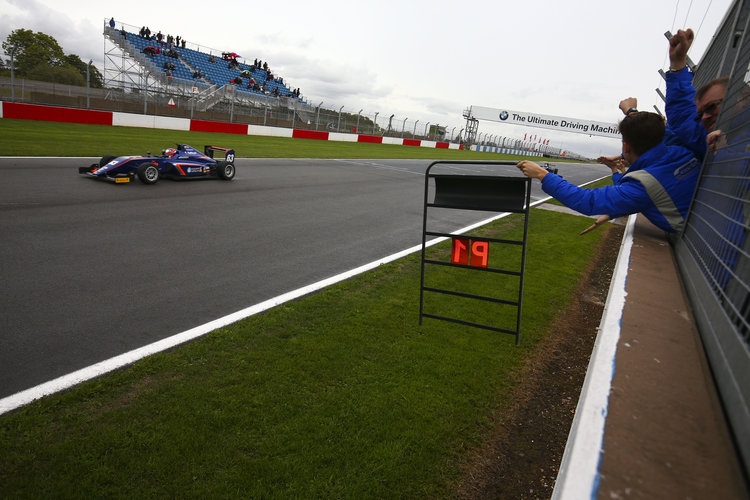 Nicolai Kjaergaard cut the gap in the BRDC British F3 Championship to 50 points after taking his second win of the Donington Park weekend.

The result is a welcome return to form for the Dane, who has now won three races in the last two rounds. He benefitted from a mistake by Carlin teammate Billy Monger, who concludes an emotional weekend with a podium.

Monger had been on pole due his fastest lap in the second race, but despite a clean start, a fairytale end was not to be as a mistake on the run into the Foggarty Esses due to the low sun dropped him down three places and handing the lead to teammate Kjaergaard.

Cian Carey ended his first weekend in the series in the gravel at the chicane. Losing the back-end on the left-hander he was unable to recover, bringing out the safety car. The track remained neutralised due to broken kerbs, resulting in a 4 lap sprint.

On the restart, Kjaergaard was forced to hold off Krishnaraaj Mahadik, with the Indian hoping to pick up his maiden win in the series. It would not be for the Double R Racing driver though, as Kjaergaard started to break away. By the time the flag fell, Kjaergaard had built a more than comfortable lead.

Recovering from his earlier incident, Monger had caught Mahadik in the closing laps, though a failed overtake in the final sector cost him his chance, finishing the weekend third.

After becoming the first female British F3 winner last time out, Jamie Chadwick would be disappointed to have not left the weekend with a podium, crossing the line in fourth. Hampus Ericsson performed spectacularly on his maiden weekend to chase the Douglas Motorsport driver in fifth.

Max Defourney took sixth after a dive up the inside of Ayrton Simmons on the restart. The Chris Dittmann Racing driver would hold on to seventh as Manuel Maldonado rounded out the top eight, despite his earlier crash that red flagged the second race.

Elsewhere, a mediocre weekend for Jamie Caroline ended in disaster as a puncture forced him to pit from third during the safety car period.

By Michael Callander
7 Mins read
Zak O’Sullivan didn’t win a race during British F3’s visit to Spa-Francorchamps, but two podiums helped to extend his and Carlin’s lead in the standings.
British F3

By Michael Callander
1 Mins read
Reigning US F4 champion Hunter Yeany will make his British F3 debut with Fortec Motorsport as the season reaches the midway point at Spa-Francorchamps this weekend.