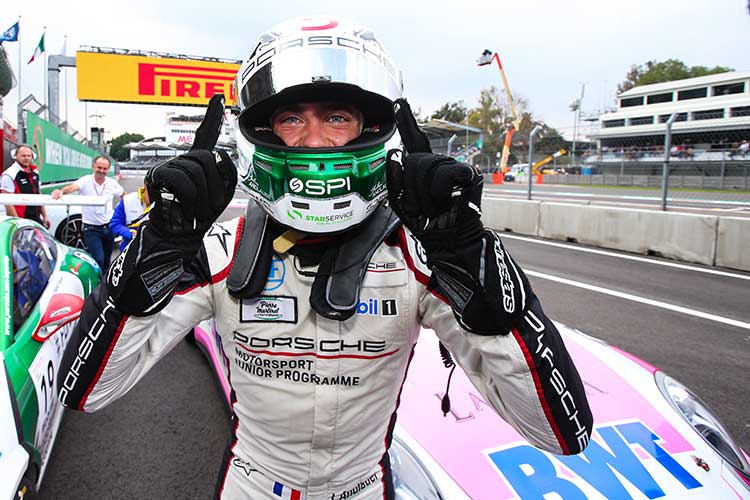 Porsche Junior Julien Andlauer claimed his first Porsche Mobil 1 Supercup victory in the first race of the double-header in Mexico City, denying championship leader Michael Ammermüller wrapping up the title in this race with one more to go.

The martinet by ALMERAS driver was understandably happy with the result, ending the year on a high, “To climb to the very top of the podium after a Supercup race has been my goal over the entire year.” said Andlauer.

“So I’m over the moon. I had an almost perfect start and was able to gradually pull clear of my pursuers,”

Ammermüller started from pole but could not defend his position as the field headed down the long start-finish straight, first losing out to Andlauer and then Larry ten Voorde snatched the lead in to the first corner, unfortunately for the Dutchman he would later receive a ten-second penalty for a jump start.

While ten Voorde forged on at the front of the pack to take the victory on track, his penalty would see him drop down to seventh place at the end of the day.

Ammermüller continued to chase Andlauer but was starting to face pressure from team-mate Thomas Preining, who on numerous occasions looked like he would make a pass for position.

The reigning champion would hold on for victory, knowing that a non-finish would seriously dent his championship bid, “It was a difficult race and my aim was to bring home as many points as possible.” said Ammermüller. “A collision would have been devastating for my title chances. Tomorrow I want to be crowned champion for the second time in a row,”

Preining claimed the final spot on the podium as the chequered flag fell, marking his fifth podium of the season, and possibly one of his favourite races of the year. “That was a crazy race with lots of duels.” enthused Preining. “I just couldn’t find a way past Michael, so I had to settle for third place,”

Nick Yelloly claimed fourth place to keep his title hopes alive after a race long battle with team-mate Jaap van Lagen; The Brit waited until the penultimate lap to make his move for fourth place, making it stick and holding on to the finish while team-mate van Lagen took fifth.

Florian Latorre was the best rookie driver in the race as he claimed sixth place ahead of the demoted ten Voorde. Mattia Drudi, Gustav Malja and Dylan Pereira rounded out the top ten.

In Pro-Am it was Roar Lindland once again who took the top honours, ahead of Nicolas Misslin and Mark Radcliffe.

Heading in to the final race Ammermüller leads the way with 137 points, Yelloly is nine points behind with Preining holding on to an outside chance of victory a further seven points down.

BWT Lechner Racing hold an unassailable lead in the team championship while the fight for the rookie title is still wide open with Latorre leading ten Voorde by eleven points.

The Pro-Am title will also be decided in the final race with Lindland leading Misslin by eight points.