Hamilton proud of 80 Pole Positions, but ready to secure more 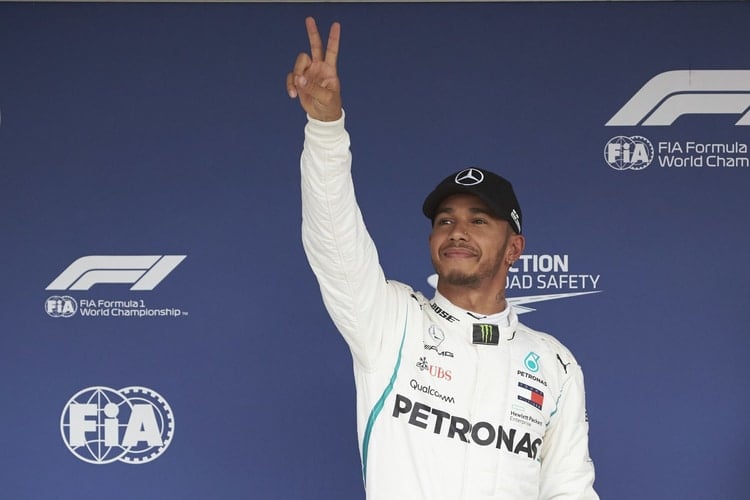 Lewis Hamilton praised the decision making of his Mercedes AMG Petronas Motorsport team as he secured his eightieth pole position in Formula 1 at the Japanese Grand Prix.

The championship leader had been fastest in all three practice sessions at the Suzuka International Racing Circuit and converted that pace into pole position.

Rain threatened throughout the session and did appear at times during the hour session and created a bit of chaos at the start of the Q3 but Hamilton was pleased his team made the right decision.

“The session started out ok, but then you look out the garage and you see it’s raining, spitting, that it’s very humid, I saw a couple of cars spin.

“We obviously had not done any practice in the wet and it looked like it was going to be wet in Q3.

“We were waiting in the garage for someone else to go out first.

“I think we made the right decisions as a team today.”

Drivers only got one run in the final part of qualifying due to the rain but Hamilton wanted to heap the praise on his team for another great job as they collected another achievement.

“It’s been a bit of an anti-climax because we couldn’t do that second lap.

“Today, they did such a great job in terms of the timings, there were no mistakes made even though there was a lot of pressure as there always is in Qualifying, yet still everyone was cool, calm and collected and did the job collectively as a team.

“It’s really an amazing journey to be on with this team and I don’t think 80 pole positions is the end – but it’s a milestone and I’m very proud.

“The last six years with this team have been incredible and I’m so proud of everyone and so grateful for everyone’s hard work which has enabled me to go out and exploit my own abilities.”

By Paul Hensby
2 Mins read
Dave Robson says the double points score by Williams in Hungary will give the team renewed confidence heading into the rest of the 2021 season.
Formula 1

Nicholas Latifi: “It is an amazing result for the team, and I am so happy for us”

By Paul Hensby
2 Mins read
Williams moved up to eighth place in the Constructors’ Championship after scoring points with both Nicholas Latifi and George Russell in the Hungarian Grand Prix.
Formula 1

"I think it definitely could've been better" - Pierre Gasly

By Jasmine Butler
2 Mins read
Amongst all the chaos, Scuderia AlphaTauri Honda scored a double points finish in Hungary.