Sergio Pérez: “I think I should have been in front of quite a few other cars” 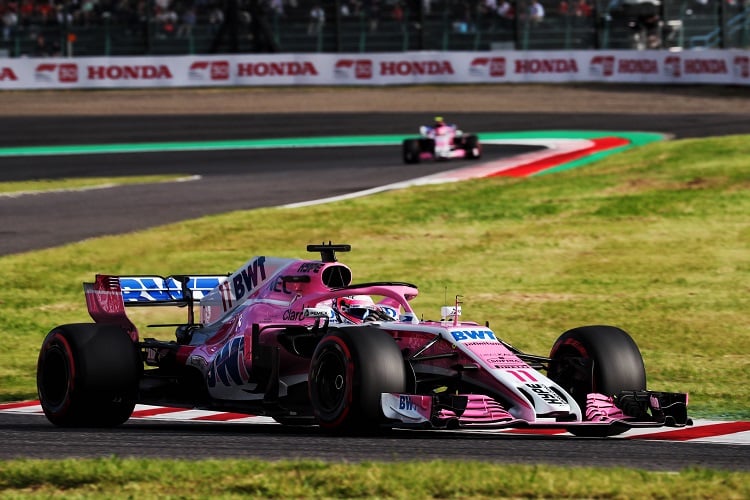 Sergio Pérez felt things went against him during Qualifying for the Japanese Grand Prix right from the early stages of Q1, and although the Mexican was able to qualify inside the top ten, he felt he should have been higher than he managed on Saturday.

The Racing Point Force India F1 Team racer was forced to make a second attempt at a lap in Q1 after having his first effort ruined after the red flags flew for Marcus Ericsson’s crash with the Mexican just metres away from completing his first run.

Pérez did get through that session and then into Q3 but the final segment saw the team took the wrong approach, with the VJM11 being fuelled up for multiple laps as they anticipated the track conditions improving following rain in Q2.

However, it became apparent the conditions were at their best almost immediately, and by the time they had gone out for a second run, the rain had returned, and he was left Qualifying back in tenth.

“I am not very happy with my qualifying result because I think I should have been in front of quite a few other cars,” said Pérez.  “It was a difficult session from the beginning of Q1.

“I was completing my lap when the red flag for Ericsson’s crash came out: I was just metres away from the line but I didn’t get a lap and I had to go again. In Q3 I went wide and lost a lot of time on my first lap when the track was at its best so there is definitely the feeling I could have done a lot more today.”

Pérez says there is potential with the car this weekend in Japan and believes the team can make progress from the grid slot, which becomes ninth following team-mate Esteban Ocon’s grid penalty for a red flag offence, and score a good number of points.

“We need to make up some ground tomorrow,” said the Mexican.  “We start in the top ten and we have good pace so good points are achievable.”

By Paul Hensby
2 Mins read
Dave Robson says the double points score by Williams in Hungary will give the team renewed confidence heading into the rest of the 2021 season.
Formula 1

Nicholas Latifi: “It is an amazing result for the team, and I am so happy for us”

By Paul Hensby
2 Mins read
Williams moved up to eighth place in the Constructors’ Championship after scoring points with both Nicholas Latifi and George Russell in the Hungarian Grand Prix.
Formula 1

"I think it definitely could've been better" - Pierre Gasly

By Jasmine Butler
2 Mins read
Amongst all the chaos, Scuderia AlphaTauri Honda scored a double points finish in Hungary.