It was another dominant performance from Toyota Gazoo Racing at the FIA World Endurance Championship 6 Hours of Fuji as the team claimed their fourth on-track 1-2 finish of the season. This race victory, claimed by the #7 team, also sees the end of a two year win drought for Mike Conway and Kamui Kobayashi, the first WEC victory for Jose Maria Lopez, and the first win of the ‘Super Season’ for the #7 crew.

After having Lopez’s fastest lap time deleted from qualifying yesterday as the #7 team were found to have sped in the pit lane, the winning car started from the back of the LMP1 field in eighth.

The first few laps of the race were held under Safety Car for a wet track as the predicted rainfall had hit the track before the race started. Only two laps of track action were lost before the Safety Car pulled into the pits and released the WEC field into the six-hour endurance fight around Fuji Speedway.

It took Kobayashi just two laps to get to the front of the grid and put Toyota into the one-two position they would maintain for the duration of the event. With the third-placed Rebellion Racing #1 finishing four laps down on the Toyotas at the chequered flag, it shows that the EoT changes that were enforced this weekend have not had the desired effect, and that bringing the competition closer in the LMP1 field needs reviewing.

Trying to find an edge on the sister car that had a 1m20s lead on the field, the #7 Toyota team decided to go for an early pit stop, shifting their strategy off schedule with the rest of the LMP1 grid. Due to their early pit stop, they were in prime position to take over the lead from the #8 when the MR Racing Ferrari had a tyre failure on the main straight, depositing debris all over the track. 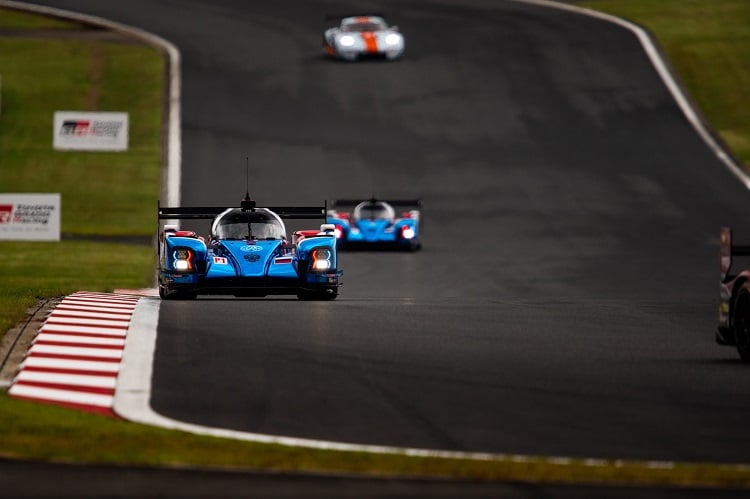 The Safety Car was brought back out on track, and most of the field dove into the pits. Because of the #7 not needing a pit stop and the lead that the #8 Toyota had built up being reeled in due to the Safety Car, Conway, Kobayashi and Lopez took victory from Fernando Alonso, Sebastein Buemi and Kazuki Nakajima. The #7 crew managed to hold onto around a 20-second advantage to the sister car, allowing them to take the chequered flag first and claim their first win of the ‘Super Season’.

Alonso had suffered from rear balance during his stint in the car, so the team opted to change the rear deck when the Spaniard came into the pits to hand the car back to home hero Nakajima with about an hour to go. This loss of time in the stop solidified victory for the #7.

Reliability played its hand in SMP Racing‘s day, which led to the #1 Rebellion car having a fairly trouble-free race to the last step on the podium and the best of the rest position. Both SMP cars suffered issues, leading to only one of them taking the chequered flag. The #11, and the only SMP to finish the race, had an alternator issue. It was a great drive from Mikhail Aleshin, Vitaly Petrov and Jenson Button for them to bring the car across the line for fourth in class after losing eight laps in the pits.

Three of the LMP1 cars failed to make it to the chequered flag. With technical issues, the #17 (suffered a fuel system problem) and #10 DragonSpeed (retired with a gear selection issue) ended their races in the garage. For the #3, Gustavo Menezes spun the car exiting Turn 1 whilst the track was under Safety Car for the MR Racing Ferrari.

The final LMP1 car to finish was the sole #4 ByKolles Racing Team entry. It came home fifth, but quite a way off the pace after suffering from turbo issues for the entire race.

Helping their championship cause, Jackie Chan DC Racing took an unbeatable one-two finish at the Japanese endurance race. After nearly winning last race at Silverstone, it was the Malaysian trio who took the glory and the top step in class, ahead of the sister #38 car.

The team’s dominance came from a well timed pit stop early on in the race, managing to get both cars serviced before the pit lane was closed in the opening stages. This gave them the edge and put them on a different pit cycle to the rest of the class. From that moment, there was nothing anyone else could do to catch the Jota-Sport DCR Orecas and Jazeman Jaafar, Weiron Tan and Nabil Jeffri took their maiden victory with a 26-second lead on the sister car.

After an early spin, the Signatech Alpine #36 took as much damage limitation in the class championship as they could by finishing off the LMP2 podium.

Class pole-sitters Anthony Davidson, Pastor Maldonado and Roberto Gonzalez had a race to forget. Davidson slid down the LMP2 order in his DragonSpeed #31 early on in the race, but the nail was put in the coffin after the team were forced into the garage for a long period of time in the closing stages of the race.

After appearing to be off the pace in yesterday’s qualifying, Porsche GT Team made their comeback in the race. The mixed conditions of the track played into their hands, with Kevin Estre and Michael Christensen securing the victory and a great points haul for the World Endurance GT Drivers’ Championship.

However, the victory came at the cost of heartbreak for AF Corse. The Ferrari team had played the mixed conditions perfectly, managing to secure a 13-second lead on the pack with just over an hour left on the clock. It was at that moment that the #71 of Sam Bird and Davide Rigon, who had been leading, suffered a puncture after contact was made with the LMP2 #31 car. Having to pit for repairs, the Ferrari slid down the order and gifted the 24 Hours of Le Mans class winners victory at Fuji.

It was a great race for BMW MTEK Team who scored their first WEC podium since joining the series this season. The early Safety Car shuffled the order to put Antonio Felix da Costa and Tom Blomqvist‘s #82 at the front of the pack, but it was clear quite quickly that, despite the BoP help the BMW team had received, the car lacked the pace to win. It had slipped behind the Porsche and the Ferrari by hour four, but put in a great fight to keep the fast-chasing #67 Ford Chip Ganassi Team UK of Harry Tincknell and Andy Priaulx behind to secure second-in-class and the team’s first podium.

Punctures rued AF Corse’s day, as the #51 also suffered one in the early stages of the race. James Calado and Alessandro Pier Guidi raced well to recover back to fourth in class at the end of the six-hour event.

The qualifying pace that Aston Martin Racing showed yesterday sadly did not transfer over to race day, with both cars struggling for pace and competitiveness on the wet track. The early Safety Car caught the team out, meaning they were forced to take a strategy that was not optimal and then never had the pace to fight back up the grid. They finished seventh and ninth, split by the second BMW entry.

It was Porsche’s day as the LM GTE Am Project 1 911 took its first WEC victory. Despite having an issue with their door in the opening stages of the race, the trio of Jorg Bergmeister, Egidio Perfetti and Patrick Lindsey claimed their first class victory, holding off the pole-sitting #88 Dempsey-Proton Racing.

It was a last moment position change by Matteo Cairoli that saw the #88 take the second step of the podium. In the last half hour, a very racy Cairoli put a nice move on the #90 Aston Martin TF Sport to claim second, demoting the Aston Martin to third.

Class championship leaders and class Le Mans winners, Dempsey-Proton Racing #77, had a difficult race, unable to finish any higher than eighth in class.