Despite the difficult conditions at the FIA World Endurance Championship 6 Hours of Shanghai, Toyota Gazoo Racing were still able to claim their fourth dominant one-two of the season. However, it was also a race of firsts, as SMP Racing took their first WEC podium this year, and Aston Martin Racing claimed the new Vantage’s first race win.

The rain that had been hovering around ahead of the race finally fell at the start of the endurance event, causing two red flags and four safety car periods during the six hour event. It was only in the third hour of the race that conditions had improved enough to get the race going with green track conditions.

The #7 Japanese entry converted their pole position from yesterday to the race win. The sister car had looked punchy throughout the session, gaining on the #7 crew in the pits and managing to exchange positions on the track, but ultimately it wasn’t enough to stop Mike Conway, Kamui Kobayashi and José María López from taking their second consecutive race win.

The advantage swung firmly into the #7’s hands when, during a caution period in which the field were led through the pit lane, they made their second stop. This saved them time on the rest of the field who hadn’t optimised in this way, including the sister car. Sebastien Buemi came in for the #8’s pit stop and to swap duties with Fernando Alonso one lap later, but the grid had been released back onto the track, meaning more time was lost on the field. To add insult to injury, the Spaniard was then held at a red light at the end of the pit lane, handing the #7 about 20 seconds on track.

Kazuki Nakajima was reeling Conway in as the race began to reach its conclusion, but a crash for the #17 SMP saw the safety car deployed again with about 20 minutes on the clock. By time racing was back to green (six minutes on the clock), there was too much to be made up by the Japanese driver to deny the #7 their second win of the year.

The two were split by 1.4 seconds at the chequered flag.

Despite one of their cars crashing out at the end of the race, SMP had something to cheer about as the #11 took third place, a lap down on the Toyotas. This marks as the first podium of the year for Vitaly Petrov, Mikhail Aleshin and Jenson Button, the latter of which stood on a WEC podium for the first time.

The Rebellion Racing trio of Bruno Senna, Neel Jani and Andre Lotterer were keeping the pressure on the #11 in the closing stages, but a mistake on the wet track saw Lotterer drop 16 seconds on the Russian car, and they finished fourth in class.

If track conditions hadn’t been so bad at the start of the race, it would have been an early end to the day for the sister #3 Rebellion. Thomas Laurent hit the barriers during the safety car that started the race, but as the race was then placed under a red flag the team were able to repair the damage and send them back out with the rest of the grid, losing little to no time on the pack.

It was a battle for the win between the #38 Oreca and the #31 DragonSpeed LMP2 car throughout the four hours of racing that got underway. Although Aubry had a couple of spins towards the end of the race, the advantage was enough so that this didn’t lose the team their home win. 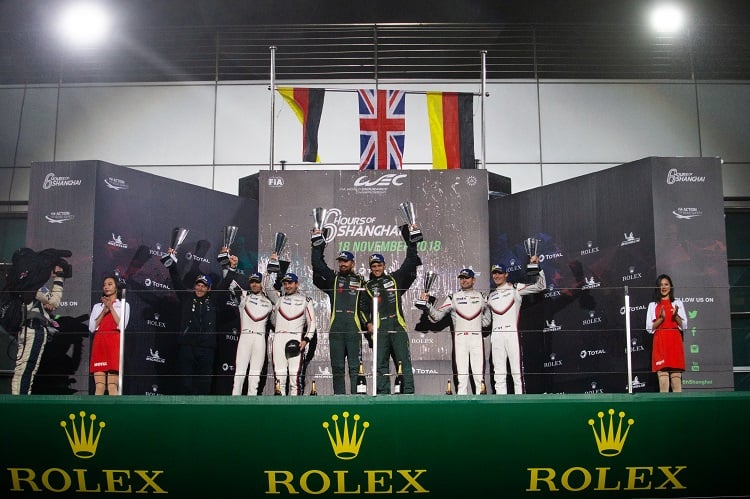 The Dane Train came out on a mission today, securing the first win for the new Aston Martin Vantage. The duo managed to finish seventh overall, ahead of the LMP2 winners in the #38.

Both Aston Martins shone in the typical British weather, and it was only with half an hour to go that the Pro podium switched from a double Aston Martin to a double Porsche GT Team one.

It is difficult to tell if this increased pace from Aston Martin was due to the rain or the shifted BoP this weekend, but if it is the latter then the racing in the last three events of the Super Season will be ones not to miss.

After having all their championship points stripped for a technical infringement with fuel flow data, the #77 Dempsey–Proton Racing Porsche claimed the class win. It was a triple Porsche podium and last time out’s class winners Team Project One split the two Dempsey entries.