Nominative determinism is the name given to an unusually appropriate relationship between a person’s name and their job. People with the surname ‘Baker’ are statistically more likely to become bakers. ‘Miss Shakespeare’ is markedly more likely to become an English teacher than a maths teacher. Indeed, these rather spooky correlations have an alarming body of mathematical and psychological theory behind them.

But of course, Mick Schumacher‘s ascendancy to the FIA European Formula 3 title and the Ferrari Driver Academy is something much less nuanced. Not only has Mick’s career been shaped by a surname synonymous with racing glory, but by a collective desire to see that illustrious name return to the pinnacle of motorsport.

The painful loss of Michael from public life has evolved into an impassioned yearning to see his son follow in his footsteps. Long before Mick’s breakthrough in European F3 none other than Bernie Ecclestone spoke of his wish to see the Schumacher name return to F1. From the moment Mick first sat in a racing car in 2015, the motorsports community has been willing him to succeed. Mick’s poignant Ferrari deal is just the latest example of an understandable urge to create parallels with the seven-time champion.

For the many Schumacher fans desperate to see echoes of the father in his son’s career, the Race of Champions in Mexico surely proved an emotional setting to celebrate Mick’s Ferrari tie-up. The 19-year-old not only excelled on the track but reprised his father’s imperious Nations’ Cup partnership with Sebastian Vettel. Indeed, the young gun ended Vettel’s hopes of recapturing the Champion of Champions crown on Sunday with a superb duel at the wheel of the RoC buggy.

The layers of significance behind this phenomenal pairing was the central plot of the entire event. As Michael’s great protégé, as a guiding force throughout his career, it was truly emotional to see Vettel mentor his former guru’s son. The four-time champion paid a touching tribute to Mick – saying his father would be “proud” of the driver his son had become. This duo of Ferrari drivers from different generations also could not fail to tempt Will Buxton into speculating whether Mick might one day replace Sebastian at Ferrari. 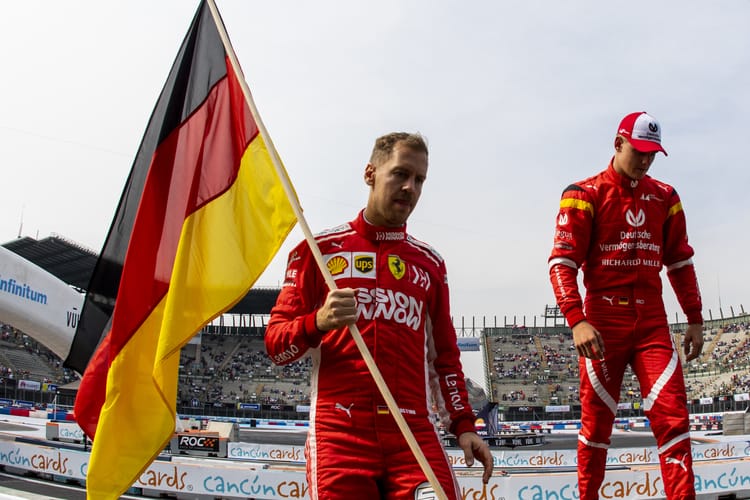 These kind of bold predictions have been a feature of Mick’s career. In the wake of his F3 triumph last year, Toto Wolff said he had “no doubt” that Mick had the potential not only to make it to F1, but to be a successful F1 driver. Lewis Hamilton proclaimed he was “100% sure” that Schumacher would make it to F1 whilst Gerhard Berger argued that many similarities with his father all pointed to a career in F1. Increasingly it feels like his illustrious name is propelling Mick on an undeviating, rudderless collision course with F1.

For most 19-year-olds this level of fated stardom would be an impossible amount of pressure to bear. However, Mick is uniquely protected from this weight of expectation by his family environment. Michael’s former manager Sabine Kehm has fiercely protected the family’s privacy since his accident in 2013. Initially karting under a different name, Mick has been largely insulated from much of the hype that has surrounded his fledgeling career.

Even as a single-seater racer, Mick has managed to maintain a relatively low profile; scarcely conducting any interviews and only giving in to the lure of the F1 paddock on a handful of occasions. However, as an F3 champion, Ferrari driver and F2 rookie, privacy is a luxury that won’t be afforded in 2019. Nor will Mick’s surname be enough to sustain his F1-bound magic carpet ride. Mick will need to step up and put to bed some legitimate concerns that have surrounded his on-track performances to date.

The fact that the controversial circumstances surrounding his F3 title aren’t better known is just another marker of the wishful mindset that surrounds Mick’s career. Following on from an uninspiring rookie season in European F3, Schumacher started his sophomore campaign unable to make any kind of concerted improvement – routinely struggling to match the qualifying pace of his Prema Powerteam team-mates.

Despite collecting his first pole and first win during a much more credible outing at Spa, he finished the weekend down in 10th in the standings at what was the midpoint of the season. Thereafter Mick won seven of the next twelve races, including a run of five consecutive wins in September. It is difficult to recall quite such a violent change of tempo in any kind of racing, let alone single-seaters. It was a quantum leap so devastating, so unprecedented, so abrupt that it raised eyebrows both inside the F3 paddock and out.

The paddock rhetoric only confused matters. Some teams claimed that it had grounds to challenge Schumacher’s car, but wouldn’t because of the likelihood of a public outcry. Prema team principal Rene Rosin argued that it was impossible that the car could have been illegal because the team had simply followed the same procedures it had for “years”. Fellow Mercedes engine user Enaam Ahmed said that having seen Mick’s data that he could “guarantee” that the German was not benefiting from any extra power. Title runner-up Dan Ticktum made his thoughts abundantly clear in a rather infamous Instagram post.

Of course, it is technically possible that Schumacher won the title of his own volition – there is certainly no concrete evidence to the contrary. It is technically possible that Mick is a developmental phenomenon and experienced the first epiphany in recorded F3 history. However, it seems unlikely. Racing drivers simply don’t find an all new level of speed, consistency and confidence overnight. Much of the weight of considered opinion now agree that an invisible – but not necessarily illegal – factor saw an increase in the engine power on Schumacher’s car during his title surge.

But regardless of engine enigmas, the title doesn’t change the fact that for three-quarters of Schumacher’s F3 career, he was struggling to make much of an impression on the front of the field. Indeed, excluding his September heroics, Mick was on average the slowest Prema in qualifying over the past two seasons. Not only does Schumacher need to prove that he was the driving force behind his meteoric resurgence, but he also needs to leave behind a rather unspectacular start to his single-seater career. Happily, Mick will get the chance to do just that.

The title has changed two crucial factors in the 19-year-old’s career. Not only has it exponentially increased the public exposure on his previously insular career, but in winning a prestigious title in an ultra-competitive championship, the F3 crown became an excuse to test Schumacher’s abilities at a much higher level. So instead of following Prema team-mates Marcus Armstrong and Robert Shwartzman (who was also rumoured to have benefited from a mysterious elevation in power) into the revamped FIA Formula 3 series, Schumacher will race in FIA Formula 2 in 2019.

Albeit set to reprise his successful relationship with Prema, Mick is due to line-up alongside Sean Gelael. With the occasional Toro Rosso tester having finished 15th in the standings for three consecutive seasons in F2/GP2, he is not the ideal benchmark for Schumacher to measure his transition into F2 machinery.

For added pressure, Schumacher’s F2 plans see a reunion of Prema and the Ferrari Driver Academy which immediately evoke memories of Charles Leclerc’s remarkable F2 campaign in 2017. Given the exciting convergence of such a successful team, a promising young driver, an increasingly influential driver programme and the general desperation to see the Schumacher name make a comeback, it’s not difficult to see why social media was soon overflowing with those expecting to see Mick in the championship fight. An impressive weekend at RoC was enough to push the tone towards full-on hype.

Indeed, the rhetoric surrounding Schumacher in the past months would have you believe that F2 will simply be a stepping-stone in Mick’s inevitable F1 arrival. However, it’s impossible to remotely justify this kind of mindset. In reality, 2019 promises to be an uphill challenge for the young German – an exercise in expectation management.

A tough rookie season following the switch from F4 to F3 is already reason enough to doubt Schumacher’s ability to hit the ground running in F2 – and that is without considering the barrage of new challenges like throttle modulation and tyre degradation. Realistically, with much still to prove, it would be a good foundation year if Mick could finish in the top eight in the standings.

To anyone who watched a confident young Schumacher excel in the Foro Sol at the weekend, that probably sounds woefully pessimistic. However, slow-speed heroics in a KTM X-Bow and a run of F3 results with some fairly legitimate doubts behind them are not the makings of an F1 driver. For all that it is understandably difficult to exclude any thought of the maestro when discussing his son, it’s a disservice to the undeniable flashes of promise Mick has shown to only view them through the prism of the seven-time champion.

It’s also not wrong to want the Schumacher name to return to F1. However, it is wrong to assume that Mick’s great name is a golden ticket to an F1 career without properly interrogating his performances. Happily, the final rungs on the ladder to F1 are ones that will demand an all new level of performance from Mick. No F1 team will sign a driver on the back of a prestigious name alone – the 19-year-old will need to earn a seat with a fresh start in his previously chequered career. Under the microscope of the adjoining F1 paddock, stripped of his media defences and flying the flag for Ferrari – F2 will leave Mick with nowhere to hide in 2019.

By Paul Hensby
2 Mins read
Lance Stroll scored his third top-ten finish of the 2022 season in Sunday’s Canadian Grand Prix despite starting down in seventeenth position.