Teemu Suninen leads a round of the FIA World Rally Championship for the first time in his career at the end of Friday after a dramatic first full day of action on Rally Sweden.

The young Finn, who won two of the seven stages across the day, has a narrow two second lead over Ott Tänak with the Toyota GAZOO Racing man slashing his lead by 13 seconds on the final Torsby run.

Stage eight caused problems throughout the field with Suninen driving most of the stage with a flapping light cluster on the M-Sport Ford Fiesta that caused him to drop time.

The second Toyota of Jari-Matti Latvala, who was second overall going into the final stage of the day, skidded into a snowbank and although he got going some twenty minutes later, he chose to retire from the day’s action.

This promoted local driver Andreas Mikkelsen into third after a day of stages mainly in his home country of Norway and he’s 18 seconds adrift of leader Suninen in the leading Hyundai Shell Mobis i20 Coupe.

Championship leader Sebasiten Ogier was another man in trouble as he also hit a snowbank, this time on stage six and although the car was undamaged, he was stuck on the snow and couldn’t continue with two-time WRC champion Marcus Grönholm also going off the road earlier in the day and retired as a result.

Elfyn Evans had a solid start to the event and sits fourth overall, with the Welshman also winning a pair of stages on Friday, while Esapekka Lappi survived a high-speed spin that nearly sent his Citroen Total Racing C3 WRC into a roll and is fifth going into Saturday. 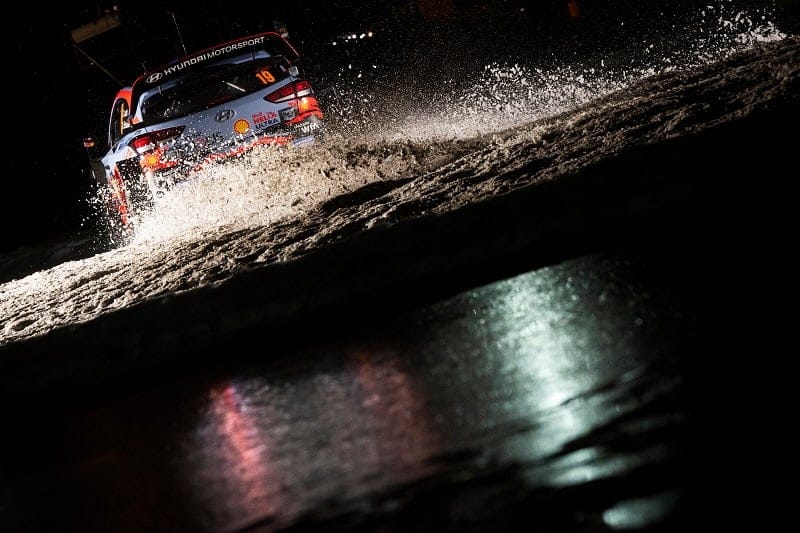 Sebastien Loeb is sixth as he continues to gradually improve in the second Hyundai and he’s followed by teammate Thierry Neville, who recovered from two spins to seventh overall.

The top 10 are rounded out by Kris Meeke, who Neuville leapfrogged on the final stage of the day, Pontus Tidemand, who had a throttle sensor issue and WRC2 leader Ole Christian Veiby.

WRC2 PRO sees Mads Østberg leading the class on his first appearance in the Citroen C3 R5, with Kalle Rovanperä and Gus Greensmith well behind, while Dennis Rådström has a one minute and two second lead over Tom Kristensson in the Junior WRC at the end of Friday.

Suninen fights for the top spot, Lappi’s car burned down to the...

Suninen Admits: “We Haven’t Had the Best Start to the Season”

Lappi and Suninen keeps the spirit up after day one ends

Suninen – “Whatever the weather, we will give it our best”

Suninen – “It’s good that I can set strong times on an...