2019 Tour de Corse: Evans Leads From Tänak at End of Day One 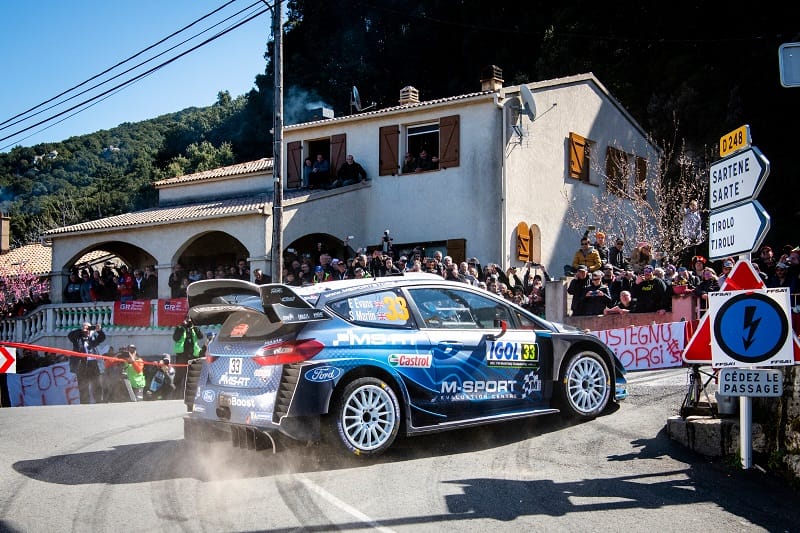 Elfyn Evans leads by 4.5 seconds over Ott Tänak at the end of a dramatic day one of the 2019 Tour de Corse.

The M-Sport Ford driver tops the leaderboard after being given an identical time to the Estonian on the final stage of the day by the rally organisers following the Welshman being unintentionally held up by Kris Meeke and was unable to get past on the tight and twisty asphalt roads until late on in the stage.

Meeke, who had earlier suffered a puncture in the day followed by damaging his suspension on stage five was nursing his Toyota Gazoo Racing Yaris WRC back to service and was unaware of Evans behind. The Irishman immediately went and apologised at the stage end up for the holdup.

Both Evans and Tanak swapped positions throughout Friday, but a pair of stage wins in the afternoon helped Evans gain the 4.5 seconds margin he has at the end of day one.

Behind in third is stage six winner Thierry Neuville, with the Belgian driver gradually increasing his speed throughout the day, while a consistent performance from Hyundai teammate Dani Sordo sees him fourth overall going into Saturday.

Teemu Suninen in the second M-Sport Ford is fifth with a rather unhappy Sébastien Ogier behind in sixth. The defending champion struggled with steering problems throughout the day and a spin on the first stage of the day also cost him more time. Citroen teammate Esapekka Lappi is seventh.

Sébastien Loeb, who returns this weekend after missing Rally Mexico, sits eighth after breaking his suspension this morning. The nine-time champion repaired the rear-left corner of his car, but is nearly two and a half minutes down on leader Evans.

Another man in trouble was Jari-Matti Latvala with the Finn picking up a puncture on stage five which cost him over three minutes and he is now 13th overall, while Meeke is down in 16th.

The two-horse race in WRC2 PRO this weekend sees Kalle Rovanperä leading by nearly three minutes over Łukasz Pieniążek after the M-Sport Ford driver stopped on stage one before managing to continue. Volkswagen Polo R5 driver Eric Camilli leads WRC2 ahead of Yoann Bonato and Nikolay Gryazin, while Tom Kristensson has a slender 0.9 seconds  lead over Julius Tannert in the Junior WRC going into Saturday.

By Steven Batey
1 Mins read
Arctic Rally Finland will host the second round of the 2021 FIA World Rally Championship between February 26-28.