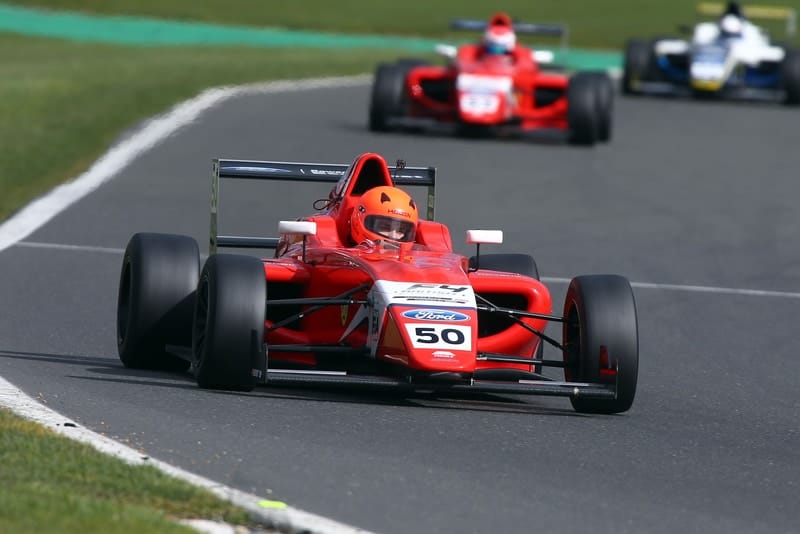 Bart Horsten has taken his maiden win in the F4 British Championship certified by FIA – powered by Ford EcoBoost at Donington Park in a shortened second race of the weekend.

The Arden Motorsport driver, who moved to the series from Australian Formula Ford, held off a race-long challenge from Carlin‘s Joe Turney as the race was suspended twice, and ultimately shortened – firstly for an incident for the Fortec of Roberto Faria and then again for another incident, this time involving JHR Developments‘ Carter Williams.

Points leader, and round four winner, Louis Foster crossed the line in third place, taking fastest lap honours in the process with Alex Connor finishing fourth to complete another solid race in his first weekend in the series.

Foster’s closest challenger in the championship, Sebastian Alvarez, rounded out the top five just one tenth of a second behind for Double R Racing with Barbadian Zane Maloney keeping himself out of the trouble ahead of him to take sixth place.

Josh Skelton jumped the initial race start but was able to avoid falling foul of the stewards as the race was restarted, where he finished in seventh place with Mario Martinez salvaging an eighth place spot after running wide early in the race, causing a safety car.

Richardson Racing‘s Luke Browning had a quiet race down in ninth place, losing out on pipping Martinez to eighth by 0.468s. Reema Juffali rounded out the top 10 with another points-scoring finish.

Tommy Foster was set for a potential podium finish but ran wide into the gravel late in the race which meant he dropped right to the back of the running order whilst Williams made the same mistake and suffered similar consequences, meaning they finished eleventh and twelfth.

Faria, who started the race on pole position, was the only non-finisher owing to the damage he sustained from his red flag-inducing incident early in the race.

The third and final race of the weekend takes place later this afternoon at 16.25.

Tom is a freelance motorsport journalist. As well as being The Checkered Flag's lead British F4 reporter, Tom is also studying for a Sports Journalism degree at Solent University and joined the Autosport Academy at the start of 2019.

Interview – Cameron Das: “Hopefully, the knowledge gained in each series will...

Browning and Lulham dominate again at Snetterton to further heat up iRacing...